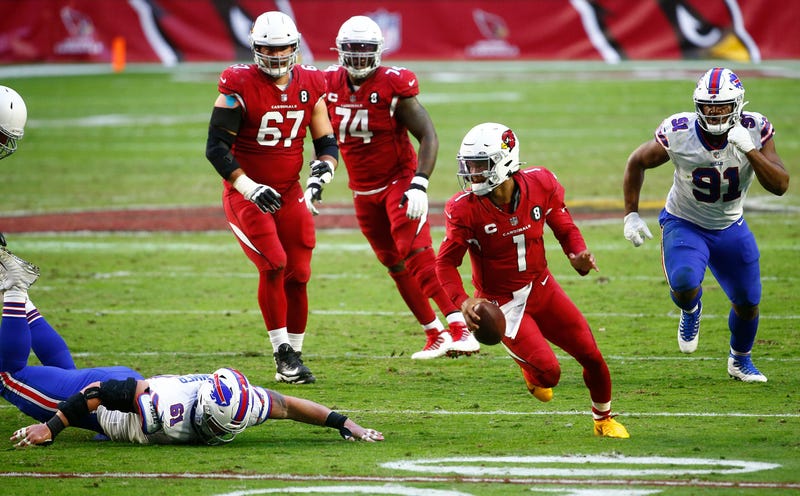 Kyler Murray authored the most memorable throw of his NFL career Sunday, connecting with DeAndre Hopkins on a 43-yard Hail Mary to give the Arizona Cardinals a 32-30 win over the Buffalo Bills.

“It’s a play we work every week,” Murray told Tiki & Tierney. “It was designed for me to roll left. They did a good job of containing me – or trying to. I had to make one dude miss. At that point, it was just me and D-Hop on the field. I locked in on D-Hop, I saw him, I let it go and I knew I had a good shot. I knew it was a catchable ball when it left my hand. I didn’t know he was going to come down with it, but that’s why he is who he is. He did the rest.”

Hopkins, a three-time first-team All-Pro, made the catch with three Bills hanging all over him. He finished with seven catches for 127 yards and a touchdown.

“In my eyes, he’s the best in the game,” Murray said. “He just does what he does. We’ve been watching him for years, but now that he’s on our team, he just adds a different dynamic to the offense. As soon as we got him, we got tremendously better. We got a lot of depth, I’m really confident in all of our guys – [but] having D-Hop took our offense to the next level.”

While the catch was incredible, so was Murray’s ability to just get the throw off. He had to roll to his left, evade a tackle, square his body and deliver an accurate ball – all in a matter of seconds.

“The difficulty of the throw, it seemed normal to me,” Murray said. “God gives you the ability to try to make a play . . . but it’s definitely hard to do. I think a lot of quarterbacks probably don’t get outside of [the rusher] and the play’s dead.”

Murray finished 22-of-32 for 245 yards, one touchdown and one interception and ran 11 times for 61 yards and two scores. He has accounted for 27 touchdowns (17 pass, 10 rush) through nine games.

Sure seems like he should be front and center in the MVP discussion, no?

“As far as MVP goes, I think that me personally as a player, yes,” Murray said.

Murray, the No. 1 overall pick in 2019, has flourished under Kliff Kingsbury. Both men – head coach and quarterback – were NFL rookies in 2019, but both are adjusting to life in the NFL. The Cardinals (6-3) already have more wins this year than they had last year (five).

“It’s definitely been an adjustment that me and him both had to go through,” Murray said. “We had to work through those kinks, he had to get comfortable, I had to get comfortable – we understand we’re in this together. People try to knock him for [his] record at Texas Tech, but he did the most with what he had if we’re going to be completely honest. You got Oklahoma, you got Oklahoma State, you had Baylor – all those teams were good when he was at Tech. It’s just tough [to win there]. I don’t buy into that argument. He’s a great coach. He’s a players’ coach. Everybody loves him. He’s got swag. He brings swag. He lets guys do their own thing and be who they are. He’s hard not to like.”