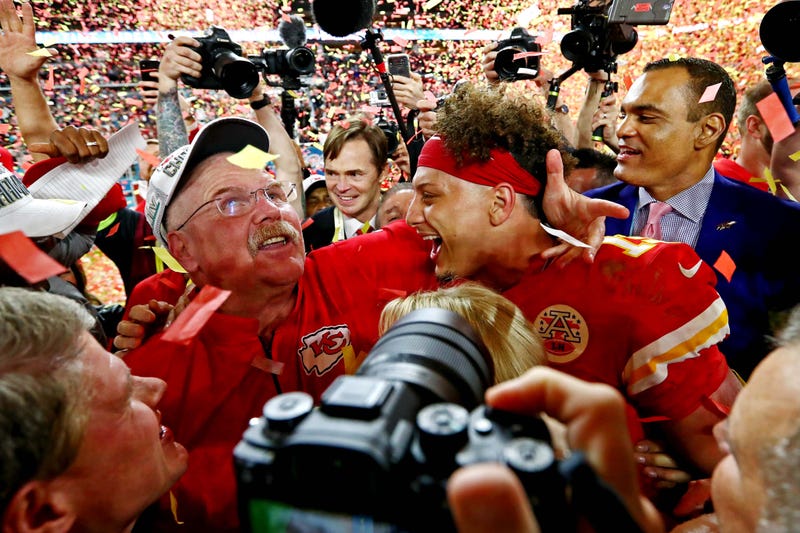 Patrick Mahomes signed a 10-year, $450 million extension with the Kansas City Chiefs on Monday, as the defending Super Bowl champions locked up their franchise quarterback for the next decade and beyond.

One question worth pondering, though, is this: who will be Mahomes’ coach by the end of the contract?

“I don’t know if Andy Reid will be around in 10 years,” Packers legend LeRoy Butler said of the 62-year-old on The Zach Gelb Show. “The new coach will be Eric Bieniemy. He’s calling the plays. If Eric Bieniemy keeps this same offense going where they’re scoring a lot of points, [Mahomes is] going to earn every dime of that contract. Aaron Rodgers is 36, Tom Brady is 43 – quarterbacks stick around for a long time. [The Chiefs] definitely got their money’s worth.”

Bieniemy, 50, has been with the Chiefs since 2013. He has served as offensive coordinator since 2018, helping Patrick Mahomes to an NFL MVP award and a Super Bowl title.

Butler believes Bieniemy, who wants to be a head coach, should play the waiting game in Kansas City.

“It would be just like Josh McDaniels,” Butler said. ”Why would he go anywhere? He can stay there and wait for the hoodie [Bill Belichick] to leave. Belichick loves to coach. That’s the only thing he loves to do. But if he left, Josh McDaniels would be the guy. So if you’re Eric Bieniemy, don’t feel bad that you did not get a [head coaching] job – because the best job is where you just won a Super Bowl. Just stay there with Andy Reid. He’s going to teach him everything he needs to know. It’ll be his team, and then he’ll grow with Mahomes. I’m sure they’ll win another Super Bowl.”

Reid, meanwhile, has enjoyed quite the narrative shift in recent months. There were questions about whether he would ever win a Super Bowl; the only question now, however, is how many will he win?

“He had McNabb, but this is Mahomes,” Butler said. “The kid is still a kid. They got everything right. They got great ownership, they got a great fan base – they got everything they need. Now they locked up the quarterback. Now they can turn to improving the defense and doing some other good things. I think it’ll be him and Lamar Jackson for a long time.”