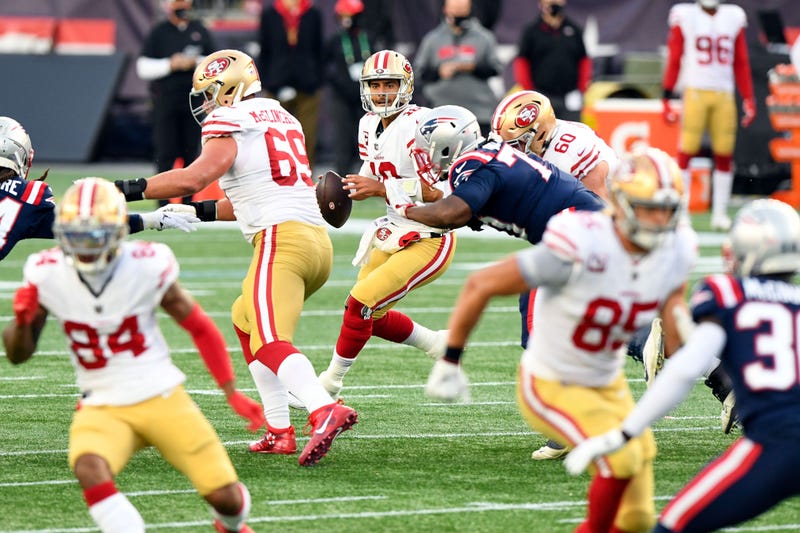 The San Francisco 49ers, the defending NFC champions, got off to a 2-3 start this season, and they looked pretty bad doing it. In fact, after losing to the Miami Dolphins 43-17 in Week 5, they appeared to hit rock bottom.

The last two games, however, have been a different story. The Niners (4-3) beat the Los Angeles Rams, 24-16, in Week 6 and downright embarrassed the New England Patriots, 33-6, in Week 7.

“The 49ers, they’re like a cat. They have nine lives,” former NFL fullback Lorenzo Neal said on The Zach Gelb Show. “The last couple weeks, they’ve been fired up.”

Jimmy Garoppolo played well against the Rams, throwing for 268 yards and three touchdowns. He didn’t look as sharp against the Patriots, however, throwing two interceptions and finishing without a touchdown.

Ultimately, what is Jimmy G as a quarterback?

The Niners didn’t need to lean on Garoppolo against New England, as San Francisco rushed 37 times for 197 yards and four touchdowns and controlled the game throughout.

“Jimmy G is as good as the running game,” Neal said. “When you have Jeff Wilson and Raheem Mostert and they’re winning on first and second down and now it’s 3rd-and-2 or 3rd-and-3, Jimmy G is an elite quarterback. That’s when Jimmy G is at his best because they can go play-action [and hit George Kittle down] the middle. Now you have [Brandon] Aiyuk and you have Deebo [Samuel]. Now you give a defense too many things you have to defend.

“So when the San Francisco 49ers are playing their best football, that’s when they’re running the ball,” Neal continued. “Jimmy G, that’s when he’s at his best – when he’s ahead. When its 3rd-and-8 or 3rd-and-9, [he struggles]. He’s a really good quarterback when the game is in front of him. If you ask him to go out every week to throw for 300, 400 yards and take over games, that’s not who Jimmy is. He’s a good quarterback, especially when the run game is working well.”

The Niners, of course, had a double-digit fourth-quarter lead in the Super Bowl last season but ultimately lost to the Kansas City Chiefs, 31-20.