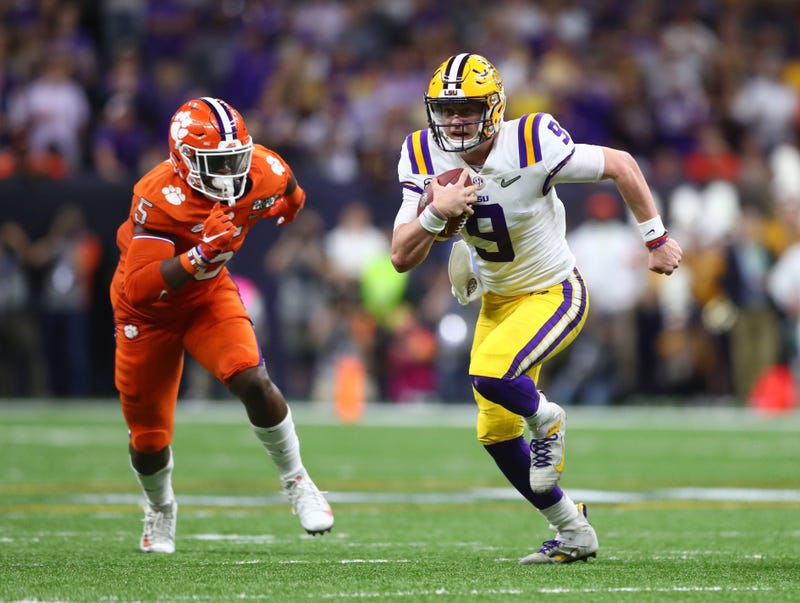 In the second quarter of the national championship game in New Orleans on Monday, LSU trailed Clemson 17-7. The nation’s best offense went three-and-out on its first two drives and had just one touchdown on its first five possessions. Things weren’t looking good.

Then LSU went 75 yards in five plays, with Joe Burrow rushing for a 3-yard touchdown to pull his team within 17-14.

“They came right back, they marched down the field, scored the touchdown and really the game kind of changed from there,” College Football Talk national writer Bryan Fischer said on After Hours with Amy Lawrence. “They scored right before halftime, they had a ton of momentum going into the locker room, and it just kind of took off from there – like so many LSU games have done down the stretch this season.”

LSU scored 21 points in the second quarter en route to beating Clemson, 42-25, and winning its first national title since 2007. Joe Burrow finished 31-of-49 for 463 yards and five touchdowns and ran 14 times for 58 yards and a score. He set FBS single-season records for touchdown passes and touchdowns responsible for – marks previously set by Hawaii’s Colt Brennan in 2006. Burrow ended the season with 65 touchdowns, including 60 through the air.

“It’s almost incomprehensible, some of the numbers he put up,” Fischer said. “Seeing him in person, you see the incredible plays that he makes time after time, whether it’s escaping pressure or launching it downfield. He’s not a dink-and-dunk guy. He’s throwing it down the field. His receivers are making plays. He’s just a special kid. Certainly all of the records, the NCAA things, the SEC records, the LSU records that will probably stand the test of time, it was just a crazy, crazy season. You can easily make the case one of the best ever for any quarterback.”

Ja’Marr Chase and Justin Jefferson, who both had nine catches, were Burrow’s top targets. Chase finished with 221 yards and two scores, while Jefferson had 106.

Clemson came up short in its bid for a third national title in four seasons. The Tigers had won 29 straight games entering Monday.