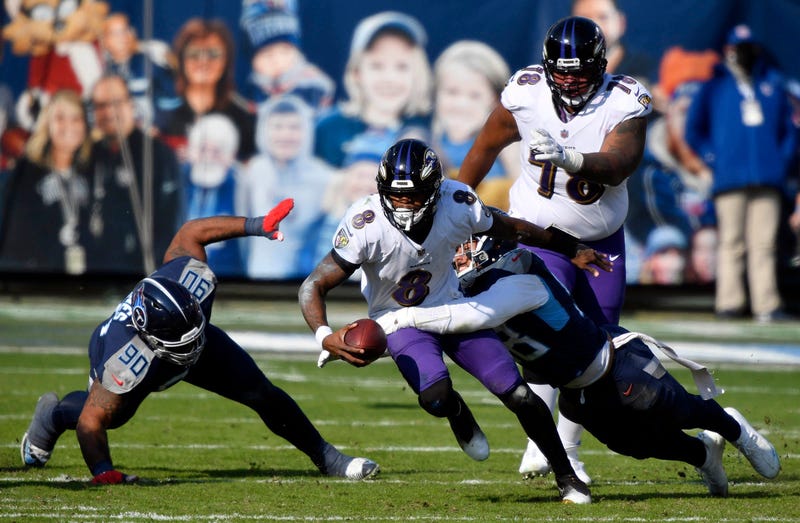 Lamar Jackson got his first career playoff win Sunday, leading the Baltimore Ravens to a 20-13 road win over the Tennessee Titans.

Jackson finished 17-of-24 for 179 yards while adding 16 carries for 136 yards and a touchdown on the ground. The defense, meanwhile, held the Titans to just three points after the first quarter, as Baltimore, which started the season 6-5, has now won six straight games.

What changed for the Ravens?

“I think No. 1., Lamar came back after COVID – there was talk of him having a little issue with his knee – and maybe sitting out for two weeks helped him rest that,” Baltimore’s 105.7 The Fan host Rob Long said on After Hours with Amy Lawrence. “I think identity [was an issue this season]. Having three running backs was a problem as well. Mark Ingram has been a healthy scratch all but one week – and that was Week 17 – and that identity came back. Dobbins is pretty much the bell cow with Gus Edwards right behind him in carries, and Lamar is being Lamar. You saw that yesterday.”

Jackson’s 48-yard touchdown run tied the game at 10-10 late in the second quarter Sunday. He has averaged 94.3 rushing yards per game over his last six games.

“I don’t know whether it was schematically that Lamar wasn’t doing what he normally does, but Lamar comes back against the Dallas Cowboys and all of a sudden he sticks that left foot in the dirt and he’s gone – and he’s been doing that a lot since he’s been back,” Long said. “I don’t know whether it’s scheme or Lamar – I don’t know what it was – but they look a lot like the 2019 Baltimore Ravens again, and it’s all because of No. 8.”

The Ravens, who limited Derrick Henry to 40 yards on 18 carries Sunday, will face the Bills in Buffalo this Saturday. Buffalo, which won the AFC East for the first time since 1995, beat the Indianapolis Colts, 27-24, this past weekend.