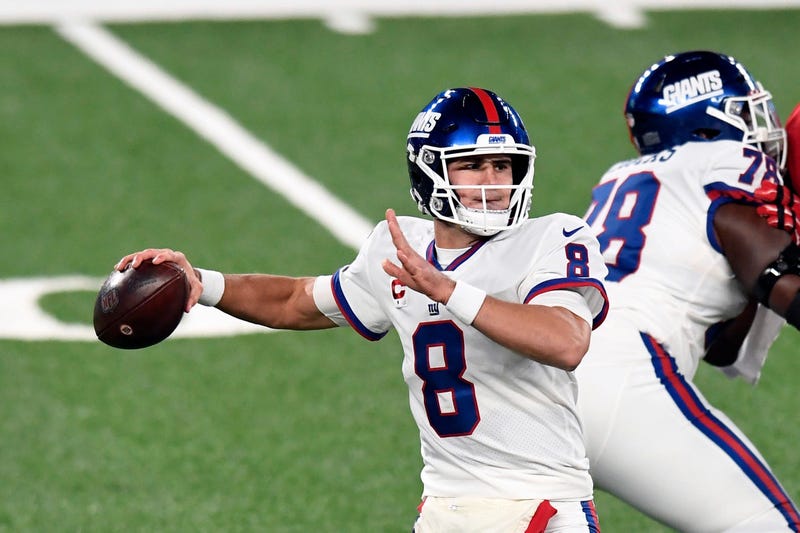 The New York Giants came oh-so-close to beating Tom Brady and Tampa Bay Buccaneers on Monday Night Football. Instead, the Giants lost, 25-23, as Daniel Jones threw two interceptions, took three sacks, and was late – way late – on a two-point conversion attempt in the final minute that could have forced overtime.

The Giants fell to 1-7 with the loss and have lost their last two games by a combined three points. They have four losses by four points or fewer.

Tiki Barber, like many Giants supporters, is frustrated – with Jones, in particular.

“He’s the kid I want to see make great plays, and every now and then, I’m like, ‘Wow, that run, that zone-read run [was incredible],’ or ‘Man, did you see that pass?’” Barber said on Tiki & Tierney. “But too much of it is, ‘Ugh, what are you doing? Don’t do that! How do you miss a dude that’s wide open?’ He could be really good, but his mistakes are making him average – and I think that’s his ceiling. I hate to say it because I want to think so highly of him. But he’s making the same mistakes. It’s the same things over and over and over and over again.”

Jones, the sixth overall pick in 2019, threw a beautiful 19-yard touchdown pass to Golden Tate with 28 seconds to go against Tampa Bay. It looked the Giants might force overtime.

But then the two-point conversion happened.

The Giants have been solid defensively; they rank 13th in total defense and eighth in run defense. But they rank 31st in total offense and 31st in scoring offense (18.1 points per game).

“It’s gotten to the point where it’s frustrating,” Barber said. “Because the only reason the Giants aren’t winning now is because of the mistakes the quarterback continually makes. Their defense, under Patrick Graham, is balling. Playing their asses off each and every week. Patrick Graham is doing things with limited talent. He’s making these guys look really good. But the Giants can’t score unless Daniel Jones gets a ‘wow’ moment, but there’s too few of them for him to be considered the full answer right now. Not that we’re making that decision, even though some people want to. It’s just like, ‘Come on, man. It’s time.’”