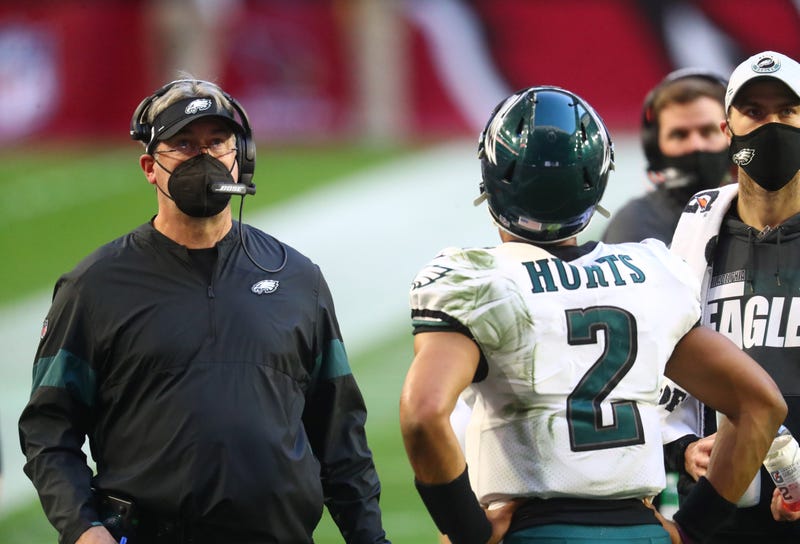 With the NFC East hanging in the balance Sunday night, Eagles head coach Doug Pederson benched Jalen Hurts in the fourth quarter of a 20-14 loss to Washington.

Tiki Barber, however, isn’t buying it.

“It’s blatant tanking,” Barber said on Tiki & Tierney. “The Eagles should be ashamed because you play every game to win. Even if your team is inferior, you still play to win that football game. To me, it wasn’t about the Giants getting into the postseason. The reality is that the Eagles, by losing that game, improved their draft position to six as opposed to nine.”

Washington, which finished 7-9, won the NFC East for the first time since 2015. Had Washington lost Sunday, the New York Giants (6-10) would have won the division.

“I don’t feel bad for the Giants. They started the season 0-5,” Barber said. “The fact that it happened is one thing; the fact that [Pederson] was so blatant about it is what bothers me. It’s not like Carson Wentz was starting and he’s playing relatively poorly, the game is tight, [and you give] Jalen Hurts [a chance]. If you crap the bed because Jalen Hurts has no experience, we’ll say, ‘He was a second-round draft pick. The season was lost anyways. I wanted to see Jalen Hurts. This was a good call.’

“But Carson Wentz is inactive,” Barber continued. “He didn’t even dress for the game. Jalen Hurts is starting, he’s playing great as a playmaker – not as a passer, but as a playmaker. He scored two touchdowns, he’s making things happen, he’s moving them up and down the field – you need to see Jalen Hurts.”

Indeed, the Eagles could reportedly move on from Wentz this offseason. If so, will they move forward with Hurts as the starter? Or will they draft a quarterback or add someone in free agency?

Either way, getting as many reps as possible for Hurts seems like a logical course of action.

“You have a decision you’re going to have to make after this season regarding Jalen Hurts and Carson Wentz if he’s continuing to ask to be out of Philadelphia,” Barber said. “Play Jalen Hurts, not Nate Sudfeld. It made no sense – and the blatant nature of it is what I think is bothering a lot of people. Some people don’t care, but I think for the integrity of the game, you have to care if you’re the NFL.”