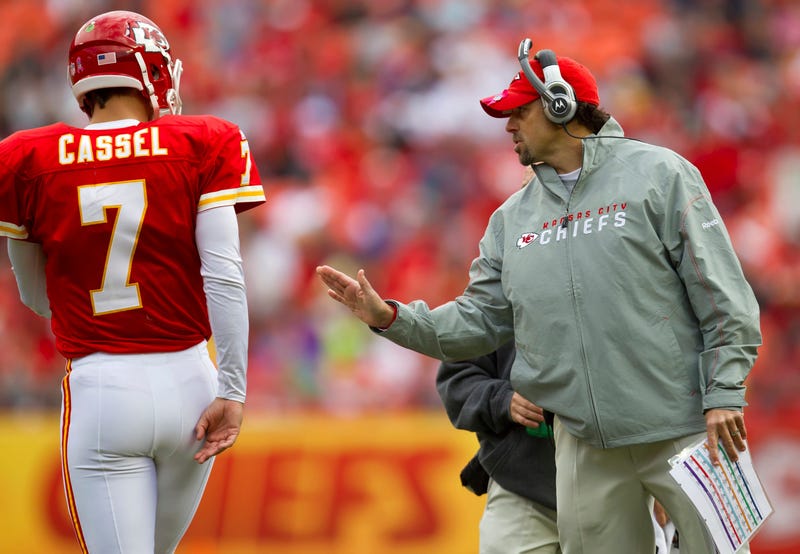 Such was the case for then-Chiefs head coach Todd Haley and then-Chiefs quarterback Matt Cassel in 2010. Haley and Cassel got into it over play-calling during a Week 16 matchup against the Tennessee Titans. In fact, Cassel claims it got so bad that eventually Haley refused to give him the play calls.

A decade later, all Haley can do is laugh.

“I really liked Matt,” Haley said on The Zach Gelb Show. “I’m proud of what he did for us with the Chiefs. He had arguably his best year, made the Pro Bowl, we won 10 games [and] won the division after being not a very good team for a number of years even before I got there.”

Indeed, Cassel threw for 3,116 yards and a career-high 27 touchdowns in 15 games that season. He had a good year.

But it wasn’t always easy.

“I can only say this: coaching is coaching,” Haley said. “You don’t coach every player the same; you coach them all the way that you think you can maximize what you can get out of them. This is a tough business, whether you’re a player or a coach. It’s not for the sensitive. It’s not for the faint of heart. In my 25 years, if the regular fan could hear on the headset coaches talking to coaches, coaches talking to players, players talking to coaches, I think there would be some shock involved. . . . It happens everywhere. I get a little bit of a bad rap for being a person on the sideline that gets after people, but I learned from one of the best in Bill Parcells. If you listen to Phil Simms, he got it every single play."

Cassel got it, too.

“The buttons for Matt Cassel – not being necessarily an elite quarterback [but] a good quarterback – he played a little better when he was ticked off,” Haley explained, laughing. “So as a coach, I did the most I could to keep him in a ticked-off state of mind. And like I said, I’m proud of how he played, and I’m proud of what we were able to do with that team. We did a lot of good things, and we got ourselves in a position to have a chance to play in the tournament. That’s always a big thing in this league.”

But did Haley really refuse to give Cassel the play calls because of a disagreement?

“All of that is not true,” Haley said. “We had a big lead, he had played a very good game, and we didn’t need to be [passing] the football regardless of the looks we were running into. We were at a point where, ‘Hey, let’s just try to get this game over with.’ But that happens every week. But like I said, I don’t coach Ben Roethlisberger the way I had to coach other quarterbacks. Every player is different, and the bottom line is get the most out of the players you have. I look back on my NFL career as a coach, and I typically had success most places I was, and my position groups had their best years while I was coaching them. So you may not like it at the time, but that’s what coaching is, and that’s what I believe the good coaches in this league do on a full-time basis.”

Haley insists he did not keep Cassel in the dark about plays.

“No, it’s not true,” he said. “Did I yell at him? Yeah, I yelled at him plenty, but like I said, my job was to try to keep him in that ticked-off state of mind because he played better when he was a little mad.”

Gelb assumed that Haley probably wouldn’t be able to repeat on air what he told Cassel that day to make him mad.

“Probably [wouldn’t be able to repeat] the stuff he said to me,” Haley responded, laughing. “But I’ve always allowed players to voice their opinion.”