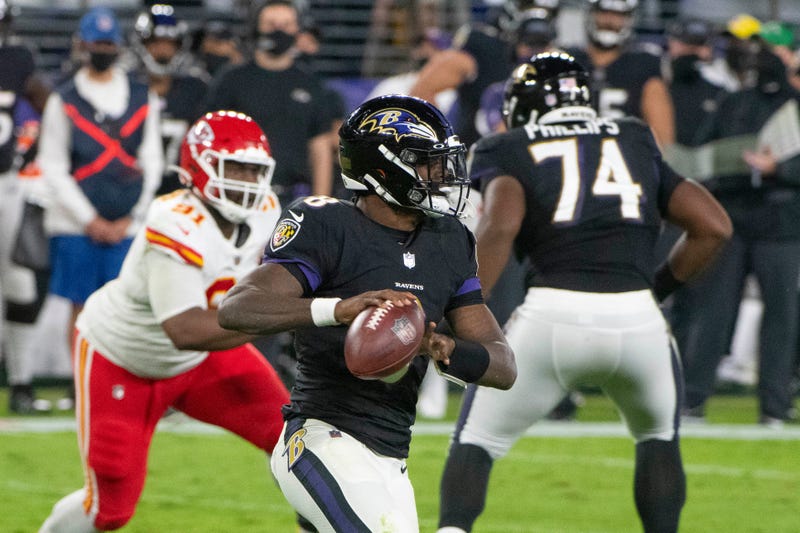 From year one to year two of the Lamar Jackson era, the Baltimore Ravens’ offense evolved. They went from running the ball almost exclusively to using the run to set up the pass.

The result? Jackson accounted for 43 touchdowns (36 pass, seven rush), led the Ravens to a 14-2 record and won NFL MVP.

This year, however, the Ravens (5-1) have struggled, as they rank 27th in total offense. Has the offense evolved from last year to this year, or is it still pretty much the same?

“I really do believe it’s much the same,” PFF NFL analyst Solomon Wilcots said on The DA Show. “Right now, they rank 31st in terms of their ability to throw the ball. The passing plays are still coming off of play-action. They’re not in an offense where they’re just going to drop back and have him play from the pocket. It’s getting him on the edge of the defense, rolling him out, play-action passes to the tight end – rarely is the ball going outside of the numbers where the receivers can give you most of the production. So [it’s] very similar to last year.”

“I think the greatest concern for Greg Roman and Coach Harbaugh is what happens if they fall behind in games?” Wilcots asked. “Is their passing game prolific enough to bring them back from large deficits to still be able to be productive? I think we saw in the Monday Night game against Kansas City their offense has yet to evolve to that level.”

The Ravens have Super Bowl aspirations, but their passing game remains a major red flag, especially against elite defenses.

“Anytime you talk about the Ravens, people are going to have the conversation because that remains on the table,” Wilcots said. “You can’t take that off the table because I think they have defied logic in some ways. Last year, they were the only offense to finish the regular season averaging more than 30 points a game, but they did it unconventional. Never before have we seen a team in our league that could score so many points so quickly . . . running the football. Usually those points come out of the passing game. So they kind of lulled us to sleep a little bit.

“But if they fall behind on the scoreboard, that’s their Kryptonite,” Wilcots continued. “What happens if they have to play from behind? Can they stick with that running game when time is burning off the clock? In most cases, most teams can’t do it. They have to start throwing the ball to get points in a hurry.”