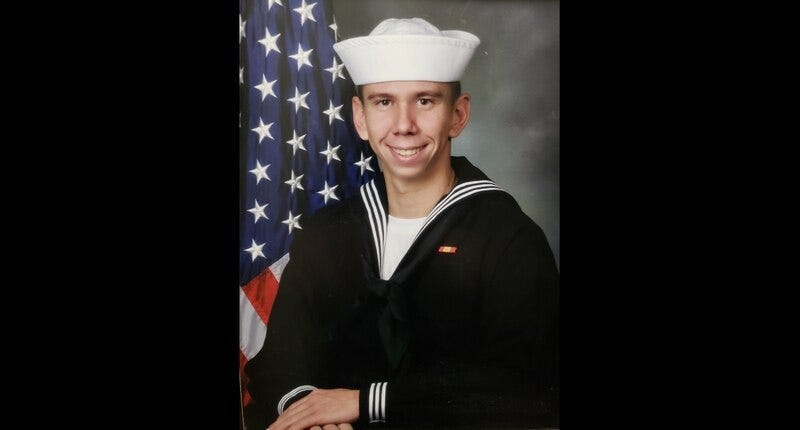 For years, Teri and Patrick Caserta walked the halls of Congress urging lifesaving change. They didn't want what happened to their son to happen to anyone else if it could be helped.

Petty Officer 3rd Class Brandon Caserta was 17 when he joined the Navy, a friendly, caring and determined young man set on becoming a SEAL. But he was badly injured during training, and wasn't given the opportunity to continue, his parents said. His shipmates berated and belittled him, saying he wasn't "SEAL worthy" and pushing him to "tap out," his parents said.

Forced into a rating he never wanted and serving under a supervisor his parents characterized as "toxic" and "sadistic," the then-21-year-old aircrew aviation electrician's mate striker, endured bullying and harassment. But he felt alone, trapped. His parents said he tried to push through and they were working on helping him. They said commanders knew about his abusive supervisor.

He left notes for friends and family, then walked out on the flight line at Naval Station Norfolk toward a MH-60S helicopter, turning and burning on the tarmac.

His parents said he yelled at the plane captain over the noise, saying, "I'm sorry for what you are about to see," before running into the spinning tail rotor blades of the helicopter. No one tried to stop him, no one tried to administer first aid, his parents said. They accused the Navy of failing him. Caserta's case was first reported by Patricia Kime for Military.com.

Now two years later, it seems lawmakers are listening to Brandon's story, to his parents' pleading and are ready to take action. Rep. Seth Moulton, D-Mass., a Marine veteran, introduced the "Brandon Act" in the House aimed at ensuring service members can get help when they feel trapped in abusive commands.

"It's something that should have been in place years ago," Teri Caserta, of Peoria, Ariz., told Connecting Vets. "What Brandon had to endure ... should not have been allowed. In today’s military, there is no room for this abuse or any other abuse that goes on in commands. It is time for it to stop in ALL branches and people need other avenues to get the help they need when they need it."

The legislation would allow troops to receive confidential mental health help that would not require their commands' be notified, a similar procedure to restricted reporting for sexual assault survivors.

"Brandon tragically lost his life because he wasn’t able to get support for his mental health — something we should provide every American, especially every American hero in uniform," Moulton said in a statement. "This bill will ensure our service members can get help and have no fear of retaliation for doing so, as it’s the right thing to do. Although we’ll never get Brandon back, his legacy will be the lives of many more great Americans he saves through this bill, and I’m proud of his parents who have fought so hard to tell his story and make this change.”

Under the proposal, service members could use a phrase like "Brandon Act" to signify that they need immediate, confidential help, a kind of "safe word" or phrase triggering a confidential mental health evaluation.

But Caserta's parents' work is far from over, they said. They still want answers for the abuses they say led to their son's death, and they said so far there's been no accountability from the Navy or leadership they say is responsible. His supervisor is still serving and never received any punitive action.

"They caused his death by abusing their power and they cannot even admit it or apologize for it," Teri said. "Failure on this is not an option."

A command investigation into Caserta's death found that leadership of Helicopter Sea Combat Squadron 28 "was likely a significant contributing factor" to his death. His supervisor was abusive, demeaning and created a hostile working environment, the investigation showed.

Since then, his parents have been determined to find an avenue for troops to get help safely, without fear of retaliation. But they also want to ensure that the type of leadership that contributed to their son's death is held accountable and established as a crime under the Uniformed Code of Military Justice.

Sen. Kirsten Gillibrand, D-N.Y., was one of the first to listen to the family.

“Brandon Caserta felt so unhappy and felt so hopeless,” she said at the hearing. “He faced personal setbacks, combined with daily abuse from his superiors and little hope that anything would change.”

Then, for the first time, the Navy admitted to failing Caserta.

Capt. Michael Colston, director of mental health programs in the Defense Department's health services policy and oversight office, said the Navy does not tolerate bullying and harassment and "to extent they happen, they're leadership failures."

Now, Caserta's case moves one step further with the potential for substantive change.

The Brandon Act has been in the works but was delayed during the COVID-19 pandemic. So the announcement was a surprise to the family, they said.

"We were very happy and excited that the Brandon Act was being introduced," Teri said. "Two of the best qualities of Brandon is his caring and empathy, not to mention his contagious smile."

Their son never wanted to be famous, Teri said.

"But in all truthfulness, we believe he would be happy about The Brandon Act," she said. "He would say it is a step in the right direction and will open the door for justice to him, us and so many others who are going through what he went through ... No one enlists in our military to be abused in any form and he would have wanted to be a voice for all of his fellow service members."

The goal of the legislation, in part, is to help reduce the stigma of seeking mental health help, particularly in the service.

“Had he not encountered multiple barriers to the access of mental health services – including the stigma of self-reporting – he would likely be here today," a summary of the bill reads.

It was unclear Thursday whether the Senate planned to introduce companion legislation, though the family has worked with Gillibrand and Sen. Tim Kane, D-Va., to create a version for that chamber.

The Casertas said they've had many troops and families reach out since their son's death, sharing their stories "just as sad as Brandon's story."

"The saddest part is they have been treated, and continue to be treated, like Brandon was," Teri said. "The Brandon Act gives people hope ... Our goal is to make sure no service member will ever feel like they are alone. We will be here for them and always will be."