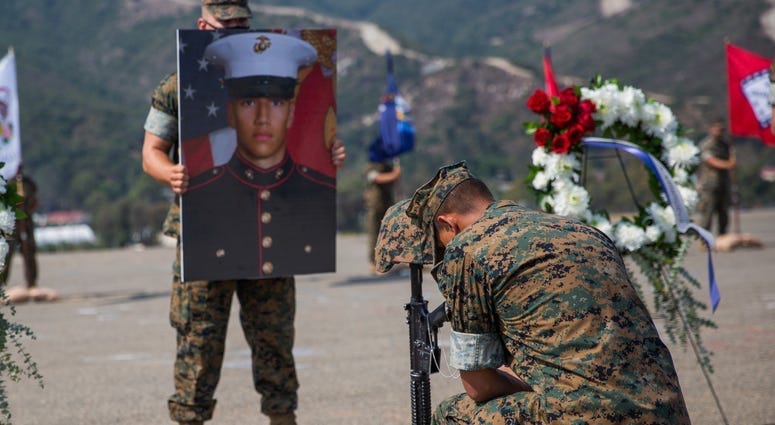 An amphibious assault vehicle returning to Camp Pendleton following a training exercise sank on July 30, killing eight Marines and one sailor on board.

Just last week, a Fort Bliss soldier was killed in a military vehicle collision during a training exercise.

These are just three of this year’s military training accidents. So far this fiscal year alone, the Army has reported 82 accident-related fatalities. Across the Department of Defense, from 2006 to 2020, 5,605 service members were killed in training accidents. This represents 32% of all reported active-duty military deaths for that time period and is double the percentage of troops killed in action.

This trend has not gone unnoticed -- in fact, Congress has been paying attention to the issue and aiming to mitigate training accidents for more than two decades. A 1994 Government Accountability Office investigation found at least 700 service members died in training accidents from 1989 to 1992. It also revealed that the Pentagon was not investigating these accidents properly.

Now, 26 years later, Congress is again asking for reform of the DoD’s investigation and reporting procedures for military training accidents.

"The loss of a single American soldier is tragic and the continued loss of service members in preventable training accidents is completely unacceptable," Rep. Vern Buchanan, R-Fl., wrote in a letter to the chairman and ranking member of the House Armed Services Committee last month.

Buchanan has been advocating for a reform of the military's training safety measures since one of his constituents, Spc. Nicholas Panipinto, was killed in an M2A3 Bradley Fighting Vehicle accident at Camp Humphreys in South Korea.

The “heartbreaking” death was “preventable,” a letter from Buchanan to Secretary of Defense Mark Esper reads. Panipinto lacked the training to operate the M2A3 Bradley Fighting Vehicle he was commanded to take on a road-test. While the Army does have training requirements for soldiers to drive certain vehicles, the master driver of Panipinto’s unit reported during an Army investigation into the accident that no such training existed at Camp Humphreys.

That Army investigation also revealed other problems at Camp Humphreys -- with the vehicles as well as with the installation itself. Malfunctioning communications systems and broken equipment in the M2A3s contributed to Panipinto’s death, as did the lack of medical services available at Camp Humphreys. Panipinto had to be transported by medevac helicopter to the closest hospital, but he did not arrive until two hours after the accident. All these factors, Buchanan argued, were preventable.

Buchanan called on the HASC to hold a public hearing on military training accidents. But so far, no hearing has been held or scheduled.

The family of First Lt. Hugh Conor McDowell -- who was killed in May 2019 in a vehicle rollover -- similarly lobbied for increased safety measures that would prevent rollover deaths. McDowell was crushed to death when his light armored vehicle fell into a hole.

“Conor died because the range safety unit at Pendleton failed to identify a vast hole completely concealed by 8-feet-high grass, weeds, and shrubs,” McDowell’s parents wrote in an op-ed originally published by the Los Angeles Times. “Why is a Marine or soldier dying every single month in military vehicle rollovers? Can anything be done to reduce this appalling death toll?”

In response to McDowell’s death, Rep. John Garamendi, D-Calif., requested that the GAO launch an investigation encompassing both the Army’s and Marine Corps’ vehicle training deaths. That investigation was announced last October.

“We’re looking at ten years of mishap data on this job to understand what the trends really are -- whether there’s upticks, downticks,” said Cary Russell, director of GAO's Defense Capabilities and Management team.

An often referred to statistic, the House Armed Services Committee wrote in a supporting document to the FY 2019 National Defense Authorization Act that in 2017 nearly four times as many service members died in training accidents as were killed in combat. While the statistic is undeniably concerning, Russell said it might indicate something other than just a straightforward “uptick” in mishaps. It could be an increase in a certain type of mishap due to increased operations, he said. It could be an improvement in the reporting of mishaps that have nonetheless been occurring at consistent rates. Or it could be systemic issues.

In Panipinto’s case, for example, an investigation of the accident revealed that leadership in Panipinto’s unit allowed the specialist to operate the Bradley without completing the appropriate training. Leadership from Panipinto’s unit has been reprimanded and dismissal or removal is being considered. But how often across the force is leadership at fault for the training fatality of a service member?

Identifying those systemic issues starts with data -- which the DoD does not have readily available.

While the ongoing GAO investigation is focusing more closely on ground combat accidents, a 2018 investigation looked specifically at aviation mishaps. The 2018 report found that DoD does not collect standardized aviation mishap data, lacks consensus in its reporting of causal factors, does not consistently collect relevant training data to analyze trends in mishaps.

And while Russell declined to comment in much detail on the ongoing investigation into ground combat accidents, he pointed out that similarly flawed data was being collected for all DoD training mishaps -- ground combat and aviation.

Each branch has procedures and processes in place for reporting on training accidents, but those measures are not standardized across the force. “Mishaps,” the DoD’s term for these training accidents, are broadly categorized into classes. A "Class A Mishap" involves a death, or more than $2 million in damages to federal property.

But much further categorization and data is likely needed, Russel explained. Accidents must be categorized by vehicle type, financial losses, deaths and investigation results in order to identify the trends and systemic issues the GAO hopes to mitigate. At this point, the DoD lacks such comprehensive data.

No timeline for the investigation’s report publication has been released. In the meantime, Russell emphasized that data is crucial to prevent future incidents.

“Make sure the military knows that we’re watching,” Garamendi told CBS News when asked what Congress should do until the GAO investigation is published. “Make sure they know that we’re not just letting this go.”