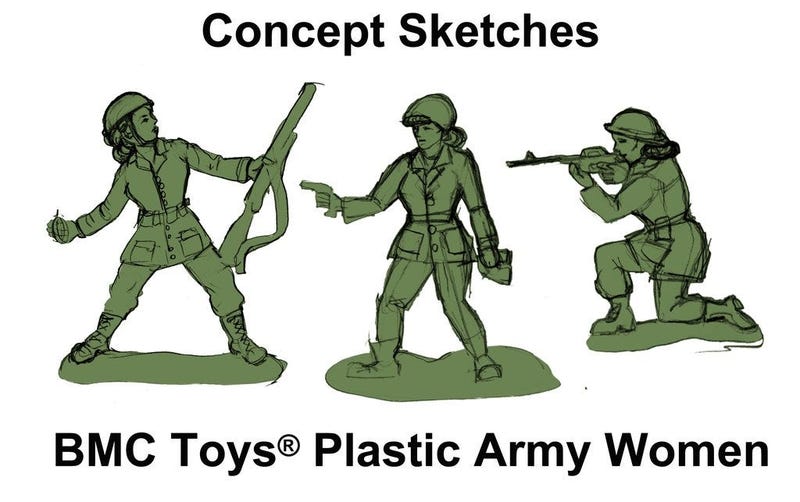 Plastic Army men are one of the most ubiquitous American toys. Sold in buckets and bags, the soldiers have changed a lot through their more than 80 years, but a few things have remained constant -- most of them are still green, and they're all men.

Time Magazine ranked Army men the 13th greatest toys in a list of the top 100 most influential toys dating all the way back to 1923.

One toy company is considering allowing women to join the ranks.

In March 2019, BMC Toys' Jeff Imel posted on the toy company's website an upcoming "production roundup" mentioning "longer-term projects I'd like to develop and crowdfund that involve new sculpts and molds."

In a post from last year, Imel posted a concept sketch from artist Tina Imel of three olive-green Army women -- one with a handgun and binoculars, one kneeling with a rifle and one throwing a grenade, a rifle in her other hand.

All three women are in uniform, wearing combat boots, helmets and have their longer hair in low buns.

"I was recently asked a question that comes up every so often, 'Do you stock any female toy soldiers?'" Imel wrote.

Previous toy companies have included Army nurse figures years ago, Imel said, "but I'm not aware of anything currently available, so I let the customer know we don't have anything like that in stock.

"Usually that's the end of it, but this time the customer -- a retired Navy sailor, made a compelling case for why Plastic Army Women might be popular. I promised to conduct some research and discovered there might be enough folks looking for Little Green Army Women to consider producing some."

In an exclusive interview with Connecting Vets, Imel said the BMC concept for a plastic Army women figure set is aimed more at toys than historically accurate hobby figures. The women are in a few of the classic plastic Army men poses and in the classic green colorway "so the figures would fit in with a wide variety of the plastic figures that are already in several generations of toy boxes."

"The sketches are a first impression of what we think customers would like, based upon a few requests, some quick research, and a bit of gut instinct," Imel said, adding that people can subscribe to a newsletter to let the company know there's interest in the women toy troops. There's also a comment section in the email subscription form for people to provide feedback.

"If there are enough confirmed subscribers, we'll continue to develop the project, and possibly run a crowdfunding campaign to get these soldiers deployed sooner rather than later," he said.

The project is still in early development "which means it's just an idea at this time," Imel told Connecting Vets.

The main feedback he got about the sketches were requests from service members and veterans for regulation hairstyles. After more sketches, Imel told Connecting Vets he's unsure the regulation hair will translate as well on the small scale of the toys but plans to keep exploring options.

"The next step in development is to commission more refined drawings and choose a sculptor to create a single prototype figure," he said. "Generally a project like this takes about a year to complete, but it is not currently scheduled so there is no timeline."

Vivian's mom, Brittany, said she was embarrassed. "I had never thought of it," she said.

In her letter, Vivian appeals to the toy companies: "My friend's mom is in the Army too! I saw the pink ones, but those aren't girls and people in the Army don't wear pink."

Other than Imel's potential project, an Internet search turns up little in the way of women toy soldiers.

AmericanToySoldiers.com has a page dedicated to women service member figures. All but one of the seven figures on the page wear a skirt. Three are Navy, three are Marines.

One is called "Tavern wench."

In the "Yoga Joes" line of green plastic Army toys Series 2, a woman soldier is seen doing a triangle pose, using her helmet for support. The series also includes a military working dog doing -- what else -- a downward dog pose.

Disney brought the iconic green Army men to life in the "Toy Story" franchise. But none of them that appear, or have speaking roles in the films, are women.

At Disney parks, cast members can appear dressed as the green plastic Army men in parts of the parks dedicated to the beloved "Toy Story" films. In 2018, Disney made its toy troops co-ed, adding women soldiers to the lineup of costumed cast members.

Tom Vazzana, show director at Walt Disney World Resort in Orlando, Fla., told CNN last year that the decision wasn't "a ginormous political statement" but "it just made sense" to include women.