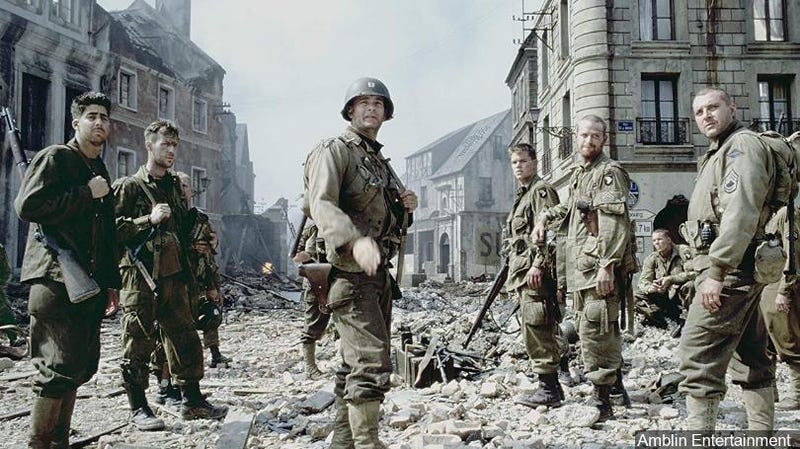 The summer movie season is typically filled with big-budget blockbusters, each one hoping to outshine the previous action and adventure film.

But this season, 'Saving Private Ryan' returns to theaters and it will once again prove why it’s quite possibly one of the greatest movies ever made.

The film, directed by the legendary Steven Speilberg, received instant praise from moviegoers and critics alike for its realistic portrayal of battle sequences and the award-winning performances from actors like Tom Hanks. It was nominated for 11 Academy Awards and won five including Best Director.

Part of the reason the film feels so real is because of the contributions of Hollywood’s most sought after military veteran, Dale Dye. A retired Marine and Vietnam combat veteran, Dye put the actors through a type of immersive training that allows them to experience what being in the military is really like. Dale told Connecting Vets, “I really appreciated what I had seen in combat and always appreciated the little guy with the rusty rifle in the rear rank who really makes up the heart and soul of our American Military.”

The scenes Speilberg and Dye created in 'Saving Private Ryan' include some of the greatest war movie performances ever filmed.

Here are a few of our favorites:

The Normandy Invasion --  The 27-minute opening re-enactment of the Omaha Beach assault during the Normandy Landings is absolutely chilling. From the ominous steel barriers standing in the shore break to the Higgins boats fast approaching the shore, the fear is palpable within the first few seconds.

Filmed mostly in Ireland, with some footage from the actual Omaha Beach, the film literally throws viewers into the battle.  “It was a huge amount of military choreography,” Dye told The New Orleans Advocate. “The guys were falling where they were supposed to fall … We could see them reloading their weapons and continuing to fire and run. I knew, at that moment, that we had a brilliant piece of film.”

Take the Kid -- A scene that captures the painful intersection of civilians traumatized by combat and the moral conflict many of our soldiers discover on the battlefield. In a driving rain storm, a local family stands atop a bombed out building and begs the soldiers to take their daughter and bring her to safety.  Private Carpazo (Vin  Diesel) defies orders from Capt. Miller (Tom Hanks) and carries her down a ladder.  Miller grabs the girl, and shouts, “We’re not here to do the right thing, we’re here to follow orders!” Seconds later, Carpazo is shot by a German sniper.

The Sniper Psalm -- As the troops are being ravaged by Nazi soldiers, Private Jackson (Barry Pepper) is a sniper ready to provide cover fire from high atop a bell tower.  He racks the chamber of his rifle and begins taking out enemy soldiers while reciting the powerful Psalm 144, “Praise be to the Lord, my rock, who trains my hands for war, my fingers for battle. He is my loving God and my fortress, my stronghold and my deliverer, my shield, in whom I take refuge, who subdues peoples under me.”

The scene ends with a moment all too common in combat and shows the depth of the filmmakers understanding of war.

Kill the enemy or POW?  This scene is truly timeless. In war, the mission is often lined with gray situations where doing the right thing often does not feel right.  After losing two of his fellow soldiers, an emotionally drained Capt. Miller makes the call to let a German POW free.  This decision causes a rift so deep among the Rangers that they actually draw weapons on each other.  To kill or not to kill -- it’s a question that haunts members of our military to this day.

Arlington -- The ending of 'Saving Private Ryan' captures the complex emotions combat veterans often feel about their combat brothers.  As an elderly James Ryan  (Harrison Young) visits the grave of Capt. Miller, he says words that are so heartfelt that they could bring tears to the eyes of any modern combat vet who has experienced loss, “I hope at least in your eyes, I’ve earned what all of you have done for me.”