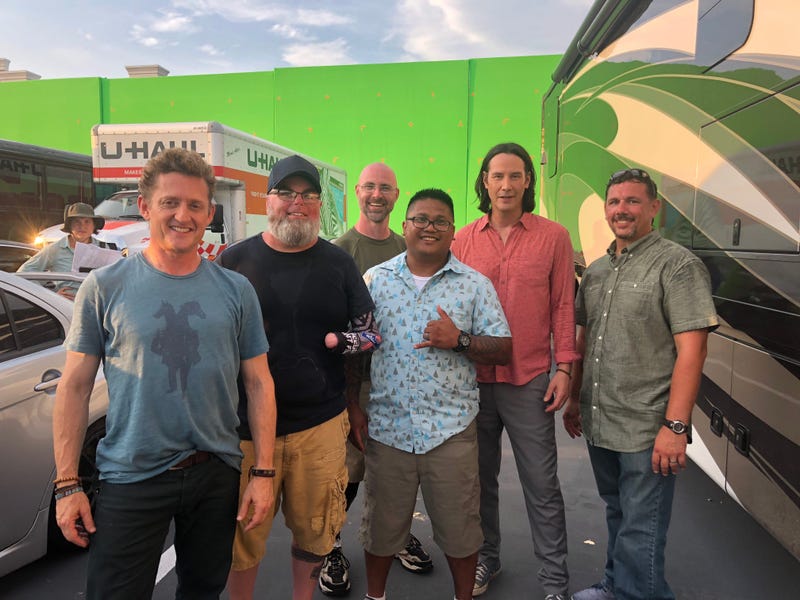 When “Bill and Ted’s Face the Music” hits theaters in 2020 everyone will recognize actors, Keanu Reeves and Alex Winter, however, there will be a few new faces in the movie which may not be as famous, but are certainly the real American heroes.

They’re the military veterans who recently visited the movie set, and had their own “excellent adventure!”

HUGE shoutout to @ed_solomon not only for donating a set visit to the latest BILL & TED romp for the winner of last year’s @HomesForOurTrps Veterans Day Auction but for ALSO casting some amazing wounded warriors as extras! (Seen below with national treasures Keanu & @Winter) 🙏 pic.twitter.com/kCkLUsq8qK

As seen in a recent tweet by CNN’s Jake Tapper, a group of wounded warriors received the trip to the movie set courtesy of Homes For Our Troops  (HFOT). Tapper, a long time HFOT supporter, helped arrange the movie set experience with screenwriter Ed Soloman as an item for the charity’s Veterans Day auction back in November 2018. "The charity auction gives shoppers the opportunity to bid on once-in-a-lifetime experiences, luxury items, and autographed memorabilia from various movie stars, musicians, and sports figures to help achieve the nonprofit’s mission," explained HFOT's Teresa Verity.

After the top bid was offered by Bill Prady, former Executive Producer of the hit TV show "The Big Bang Theory" he and Soloman worked together to make this once in a lifetime experience happen.

The honor was ours. Such a privilege to get to work with these incredible men and this remarkable organization. https://t.co/ei0v8FIOfN

No word on what type of roles the veterans will play, but rocking out with totally righteous dudes like Bill and Ted had to be an experience they'll remember forever.

About Homes for Our Troops: HFOT is a nonprofit organization that builds and donates specially adapted custom homes nationwide for severely injured post – 9/11 Veterans, to enable them to rebuild their lives. Most of these Veterans have sustained injuries including multiple limb amputations, partial or full paralysis, and/or severe traumatic brain injury (TBI). These homes restore some of the freedom and independence our Veterans sacrificed while defending our country, and enable them to focus on their family, recovery, and rebuilding their lives.

He's the Marine who makes sure Hollywood 'Gets it right'

Want to get more connected to the great stories and resources Connecting Vets has to offer? Click here to sign up for our weekly newsletter.
Follow Phil Briggs @philbriggsVet or phil@connectingvets.com