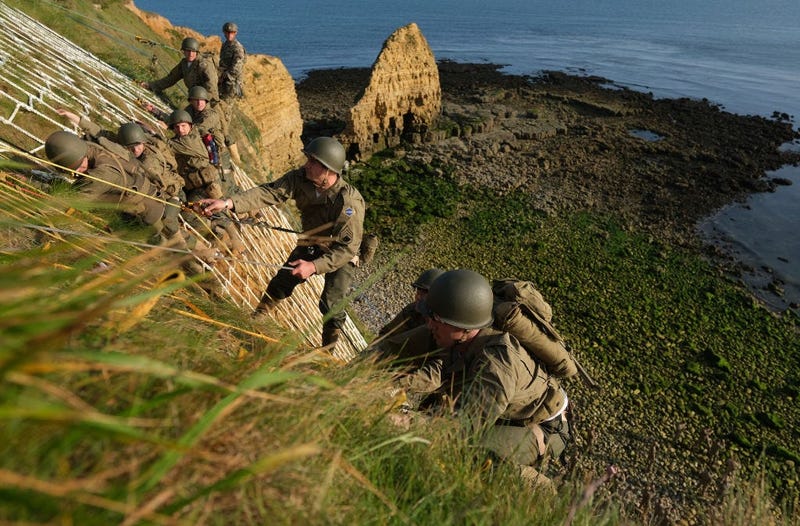 Congress has introduced another bill to award its highest honor, this time to the U.S. Army Rangers of World War II.

Already, the Merchant Mariners, women collectively known as "Rosie the Riveter" and the "Hidden Figures" who helped put American astronauts on the moon have gotten nods from Congress in the form of bills that would award them the medals.

The House already passed all three bills, leaving it up to the Senate to decide who will receive the award, the "highest expression of national appreciation for distinguished achievements and contributions" of an individual, institution or event, according to the history of the award.

Ahead of Veterans Day this year, Rep. Dan Crenshaw, R-Texas, filed a House bill to award the medal collectively to the U.S. Army Rangers of WWII. A similar bill already was introduced in the Senate, by Sen. Joni Ernst, R-Iowa.

"Through this legislation, U.S. Army Rangers of WWII receive the recognition they have long deserved. By enacting this bill, we’re telling these veterans ‘America will never forget,’” Crenshaw said in a statement on Veterans Day.

In the European theater of WWII, the 2nd Ranger Battalion, under near-constant fire, scaled the cliffs of Pointe du Hoc west of Omaha Beach during the D-Day Invasion of Normandy to destroy captured French guns before they could be turned on Allied forces storming the beach (including the 5th Ranger Battalion) and take out the German troops manning them. The 2nd and 5th also captured a battery firing on Omaha and Utah beaches.

It was 5th Battalion's landing on Omaha Beach on June 6, 1944 that established the Ranger motto: "Ranger's lead the way."

The medal is the "highest expression of national appreciation for distinguished achievements and contributions" of an individual, institution or event that Congress can award, according to the history of the award.