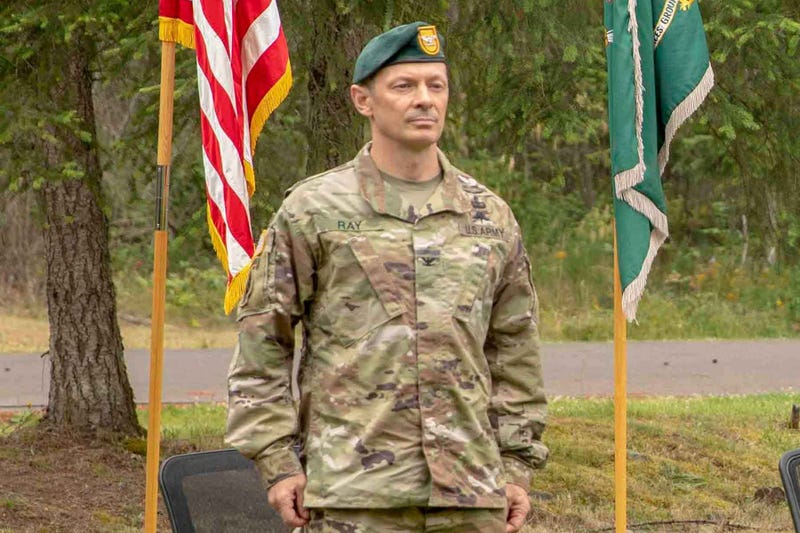 Prior to serving as the chief of staff for I Corps and Joint Base Lewis-McChord, Ray was the commander of 1st Special Forces Group.

Police arrived in the early morning hours after receiving a 911 call from Ray's wife, an Army incident report describes. Ray's wife told police that an altercation broke out when their 16-year-old daughter wanted to go somewhere but did not want Ray to drive her and he felt personally offended. Ray's wife was able to leave their home with two children, but the third was still inside. Shortly after the police arrived, the third child was allowed to leave the house.

Over the next half hour, police attempted to communicate with Ray while he allegedly acted irrationally. He came outside and put a pistol to his head, saying he would kill himself, according to the documents. He yelled to his wife, "Bitch, I'm going to kill you!" Meanwhile, he loaded and unload his pistols and shotguns, mentioning his military career and asking to talk to his boss, Lt. Gen. Randy George, according to the documents.

He then told the police that if they entered the residence that he would, "go to war," according to the Army document. At that point, he began turning off lights inside the house and barricading himself in a bedroom, the Army report states.

An Army special agent at the scene to assist told Ray that he had spoken to George who told him that, "The only thing that mattered was to keep things quiet and get him some help." Ray appeared happy to hear this. A statement from Army CID clarified this moment in the report.

"First, it is important to point out that Lt. Gen. George never made such a statement and was not aware of the arrest until after it occurred. Our special agent was trying to calm down the subject and diffuse a dangerous situation and to try and ensure the soldier didn’t harm anyone else or himself," Chris Grey, a spokesman for CID told Connecting Vets.

After a two-hour standoff, Ray surrendered to police. He appeared inebriated according to Army documents. He was then arrested and booked on four charges stemming from pointing a loaded weapon at his wife, not allowing her to leave the residence and threatening to murder his wife.

Interviewed at the scene, his wife told police that her husband had a violent temper, especially when inebriated. She said Ray beat her frequently over the course of their marriage, according to the reports. The police report states that she had injuries to her face and neck. She told police that her husband kicked and stomped on her head and neck.

Police began making arrangements for Ray's wife and her three children to find alternate accommodations as they no longer wanted to remain in their home.

Ray was booked at Pierce County jail in Tacoma, Washington.