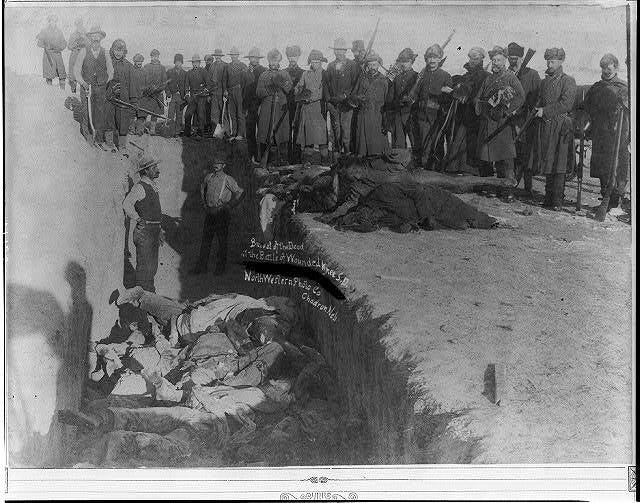 Today, 130 years ago, the U.S. Army’s 7th Cavalry killed 150 Native Americans at the Wounded Knee massacre. Today, 20 service members still hold Medals of Honor from their actions at Wounded Knee despite efforts to revoke them.

On Dec. 29, 1890, the U.S. Army’s 7th Cavalry surrounded a band of Native Americans near Wounded Knee Creek and demanded they surrender their weapons. A scuffle broke out between one soldier and one Native American and a shot was fired -- to this day it is unclear who fired the first shot. In the massacre that followed, 25 cavalry troops were killed and 150 Native Americans.

One hundred years after the battle at Wounded Knee, the 101st congress declared it a massacre expressing "its deep regret on behalf of the United States” for the “terrible tragedy.” Yet 30 years later, those 20 service members retain the nation's highest military honor for “gallantry beyond the call of duty” at Wounded Knee.

It is estimated that nearly half of those Native Americans killed at Wounded Knee were women and children.

Multiple pieces of legislation have been introduced in efforts to revoke the awards from those 20 service members who received them. The "Remove the Stain Act" was introduced in the House and Senate in November of 2019. More recently, Sen. Elizabeth Warren, D-Mass., introduced an amendment to the National Defense Authorization Act that would revoke the medals.

"The horrifying acts of violence against hundreds of Lakota men, women, and children at Wounded Knee should be condemned, not celebrated with Medals of Honor," Warren said in a statement in November.

This would not be the first time Congress rescinded Medals of Honor from service members — and the first instance was far more than twenty awards. In 1916, Congress created a review board to examine recipients of previous Medals of Honor. The result of the review saw more than 900 awards rescinded including the entire 27th Maine, 29 members of President Lincoln's funeral guard, and six civilians.

Some of these 900 rescinded awards were later restored including that of civilian doctor Mary Walker — the only female to receive the Medal of Honor. Walker's award was restored in June 1977.

Since this 1916 review, Congress has regularly passed legislation to review the records of certain servicemembers to award or upgrade awards to Medals of Honor.

Native Americans and Native Alaskans remain the demographic more likely to serve in the U.S. Armed Forces than any other group, yet they also remain among the poorest and least insured veterans with the least access to Department of Veterans Affairs services.