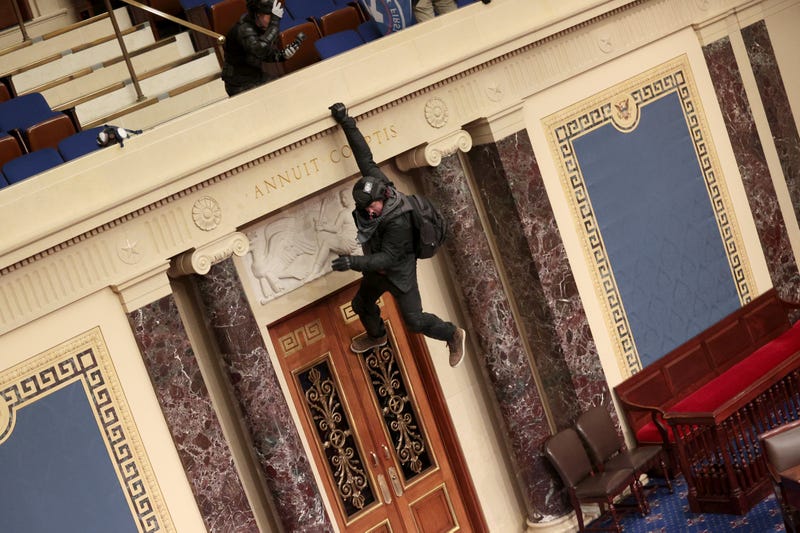 This story will update.

House Speaker Nancy Pelosi and the Washington, D.C. Mayor Muriel Bowser requested National Guard support for Capitol police on Wednesday as protesters breached the Capitol complex, tear gas was deployed in the rotunda and police faced off with rioters trying to break the doors to the locked House chamber police defended with guns drawn.

“Chairman Milley and I just spoke separately with the Vice President and with Speaker Pelosi, Leader McConnell, Senator Schumer and Representative Hoyer about the situation at the U.S. Capitol. We have fully activated the D.C. National Guard to assist federal and local law enforcement as they work to peacefully address the situation," Acting Defense Secretary Christopher Miller said in a statement. "We are prepared to provide additional support as necessary and appropriate as requested by local authorities. Our people are sworn to defend the constitution and our democratic form of government and they will act accordingly.”

Department of Defense officials confirmed that the D.C. National Guard force totaling about 1,100 was being activated to respond. It was not immediately clear if the Guard troops would be armed. From Miller's statement, it appears as though the decision was made with Vice President Mike Pence, not President Donald Trump.

Guard troops were "mobilized to provide support to federal law enforcement in the District," Pentagon spokesman Jonathan Hoffman said in a statement Wednesday. "Acting Secretary Miller has been in contact with Congressional leadership, and Secretary McCarthy has been working with the D.C. government. The law enforcement response will be led by the Department of Justice.”

The Guard troops were expected to be used for traffic control and law enforcement assistance, but were not sent with body armor and were not armed. Bowser would have to approve a change in mission for them to be armed, a Defense official told Connecting Vets Wednesday.

Hoffman said Bowser requested the 340 troops earlier this week "to assist D.C. police in preparation for possible protests today. That request was approved." Today, the mayor further requested the full activation of the Guard "to support local and federal law enforcement as they respond to the situation at the Capitol. That request was approved. There have been no other requests from the D.C. government," Hoffman said.

Virginia Gov. Ralph Northam on Wednesday confirmed that he was sending members of the Virginia National Guard to Washington at Bowser's request, along with 200 state troopers. Maryland Gov. Larry Hogan also announced that he was also sending state police to assist D.C. law enforcement.

Lawmakers and others called the mob storming the Capitol an "insurrection" and a "coup attempt."

President-elect Joe Biden and Sen. Mitt Romney, R-Utah, both referred to the events as an "insurrection." Rep. Adam Kinzinger, R-Illinois, said Wednesday, "This is a coup attempt."

Rep. Elaine Luria, a Navy veteran and member of the House Armed Services and Veterans Affairs committees said she was evacuated from her Capitol Hill office on Wednesday "because of a pipe bomb reported outside" she said supporters of the president were attempting to force their way into the Capitol "and I can hear what sounds like multiple gunshots."

"This is insane, I have not seen anything like this since I deployed to Iraq in 2007 and 2008," said Gallagher, who served as an intelligence officer for seven years, including two tours in Iraq. "This is America."

"The president needs to call this off," Gallagher continued. "Call it off Mr. President. You need to call it off."

Another Marine veteran, Rep. Ruben Gallego, D-Arizona, said Wednesday that "everyone that broke into the Capitol whether violent or not should be arrested and prosecuted."

The Associated Press on Wednesday reported that at least one person was shot at the Capitol and later reporter that the women who was shot had died. Additional information was not immediately available.

The Department of Veterans Affairs Central Office in Washington, D.C. also was evacuated on Wednesday, "as a result of civil unrest at the Capitol," according to an alert sent to employees.