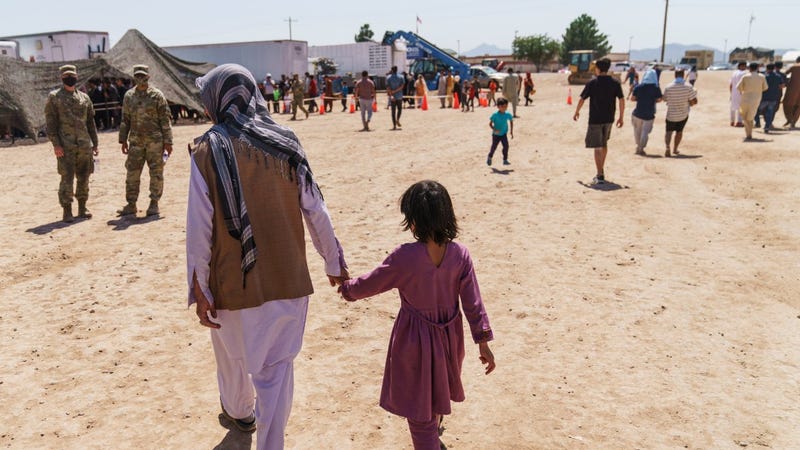 A man walks with a child through Fort Bliss' Doña Ana Village where Afghan refugees are being housed, in New Mexico, Friday, Sept. 10, 2021. Photo credit AP Photo/David Goldman
By The Associated Press

The Biden administration on Friday provided the first public look inside a U.S. military base where Afghans airlifted out of Afghanistan are being screened, amid questions about how the government is caring for the refugees and vetting them.

“Every Afghan who is here with us has endured a harrowing journey and they are now faced with the very real challenges of acclimating with life in the United States,” Liz Gracon, a senior State Department official, told reporters.

The three-hour tour at Fort Bliss Army base in El Paso, Texas, was the first time the media has been granted broad access to one of the eight U.S. military installations housing Afghans.

But even so, reporters, including those with The Associated Press, were not allowed to talk with any evacuees or spend more than a few minutes in areas where they were gathered, with military officials citing “privacy concerns.”

Nearly 10,000 Afghan evacuees are staying at the base while they undergo medical and security checks before being resettled in the United States. The operation was described by officials at the Department of Homeland Security and Department of State as a “historic” and “unprecedented" effort to facilitate the relocation of a huge number of refugees in less than a month’s time. 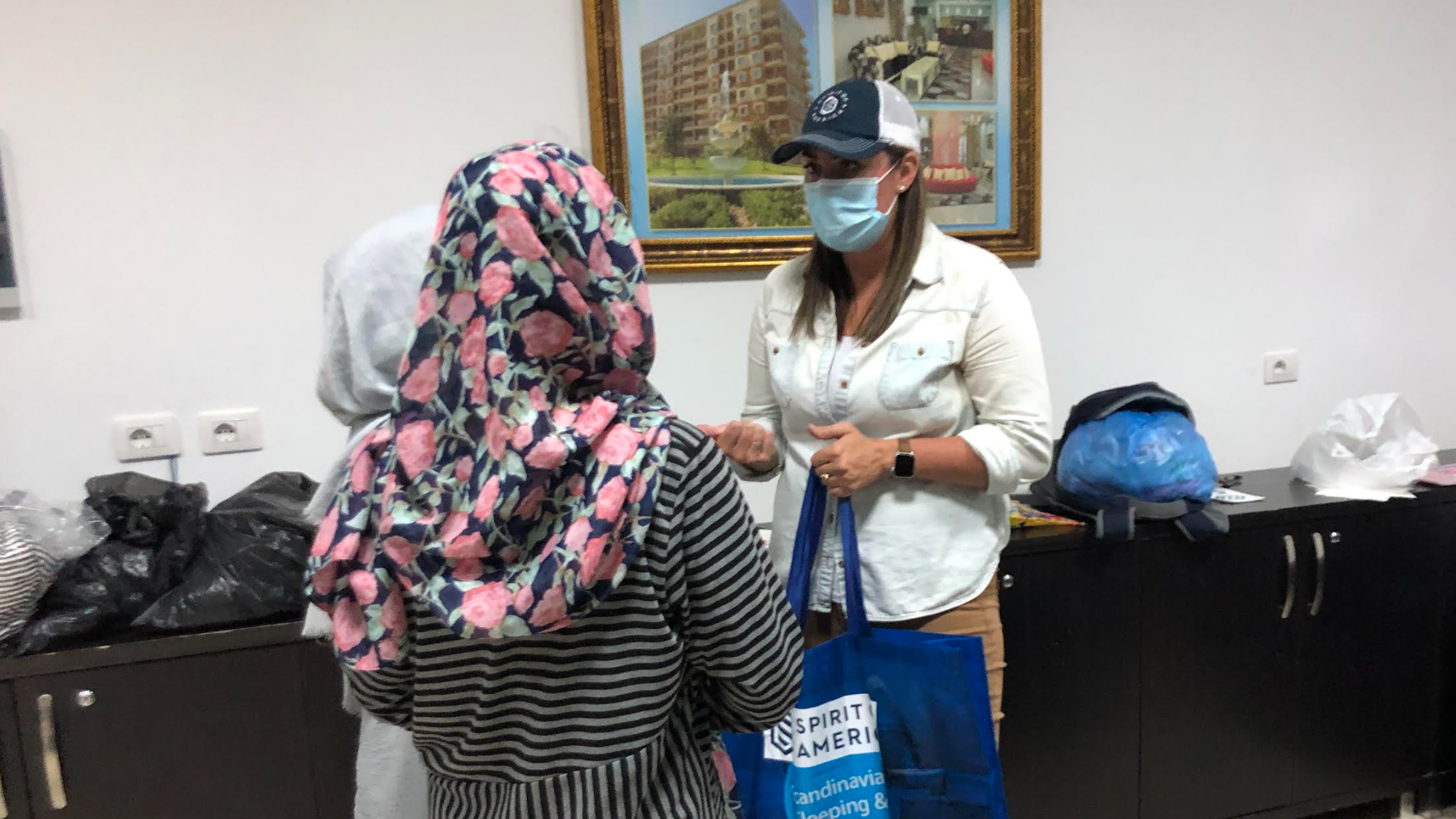 On Friday, Afghan children with soccer balls and basketballs played outside large white tents. Families walked down a dirt driveway with stacks of plastic food containers piled under their chins and Coca-Cola cans under their arms. One young girl, still wearing dirty clothing, cried in the middle of the road after her food spilled and soldiers attempted to help her. Inside the containers, which refugees had spent around 15 minutes in line for in the blistering sun, were traditional Afghan meals of basmati rice and hearty stew.

The U.S. government spent two weeks building what it calls a village to house the Afghans on the base. It is a sprawling area with scores of air-conditioned tents used as dormitories and dining halls on scrubby dirt lots, a landscape that in some ways resembled parts of the homeland they fled.

Under the program called “Operation Allies Welcome,” some 50,000 Afghans are expected to be admitted to the United States, including translators, drivers and others who helped the U.S. military during the 20-year war and who feared reprisals by the Taliban after they quickly seized power last month.

Nearly 130,000 were airlifted out of Afghanistan in one of the largest mass evacuations in U.S. history. Many of those people are still in transit, undergoing security vetting and screening in other countries, including Germany, Spain, Kuwait and Qatar. 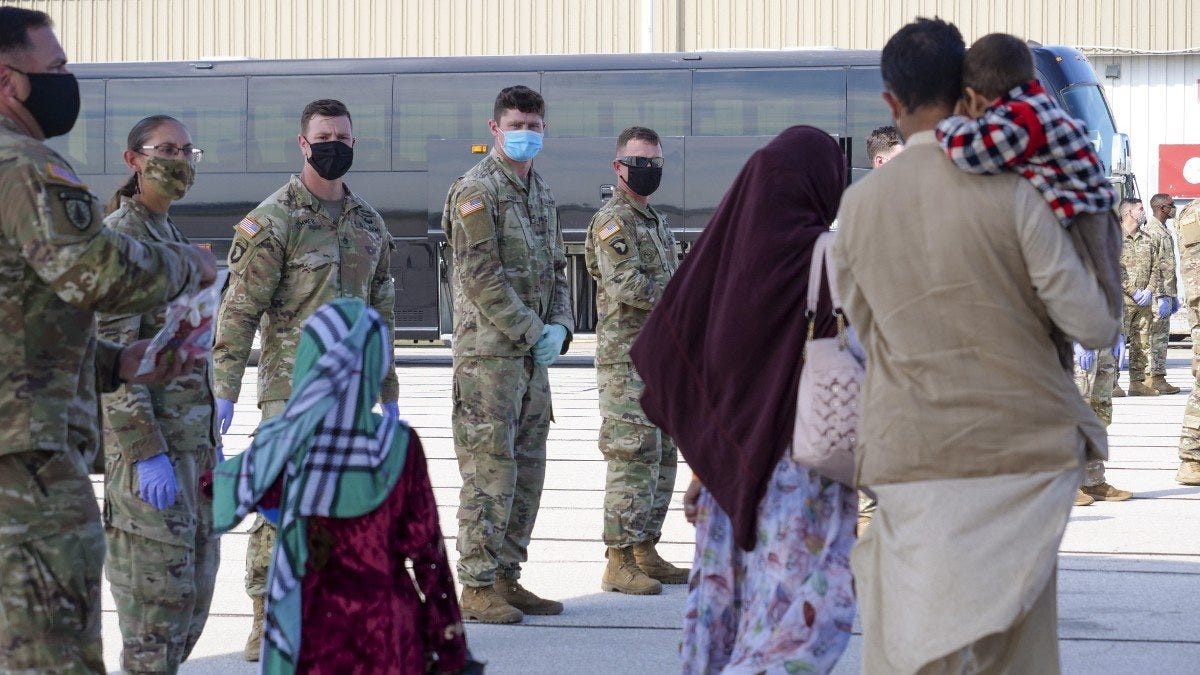 Members of Congress have questioned whether the screening is thorough enough. Many of the Afghans who worked for the U.S. government have undergone years of vetting already before they were hired, and then again to apply for a special immigrant visa for U.S. allies.

After they are released from the base, they will be aided by resettlement agencies in charge of placing the refugees. The agencies give priority to places where the refugees either have family already in the United States or there are Afghan immigrant communities with the resources to help them start a new life in a foreign land. Those with American citizenship or green cards are able to leave once arriving at the base, according to a State Department representative.

If other evacuees — whose release is dependent on completing health protocols mandated by the Centers for Disease Control and Prevention — choose to leave prior to the full resettlement period, that may be used against them.

So far, no one at Fort Bliss has been released for resettlement.

The Pentagon has said all evacuees are t