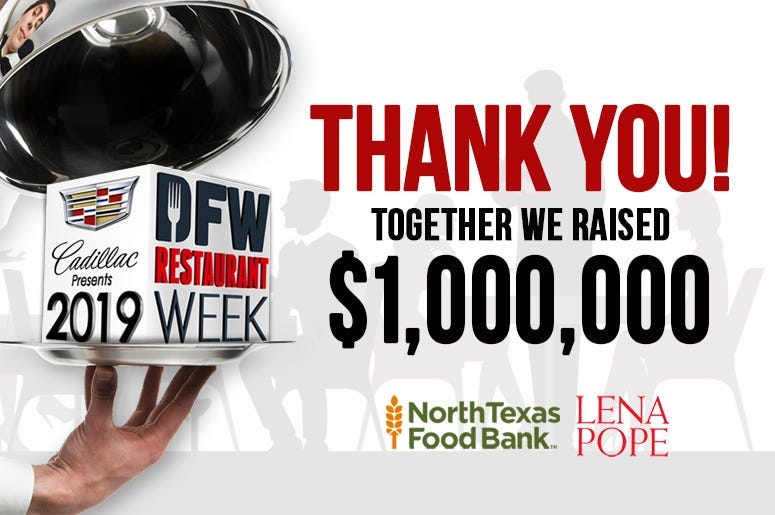 Dallas | Fort Worth – February 4, 2020 – The results are in: The 2019 DFW Restaurant Week presented by your Metroplex Cadillac Dealers raised a record $1 million for longtime charity partners the North Texas Food Bank (NTFB) and Lena Pope. This represents the campaign’s largest charitable donations to date, thanks to the diners, restaurants and sponsors who took part in the 22ns anniversary DFW Restaurant Week last August. Organizers are celebrating by honoring exemplary participation with the DFW Restaurant Week 2019 Star Restaurant Awards.

“DFW Restaurant Week is our largest annual fundraiser and makes a tremendous impact in our community,” said NTFB President & CEO Trisha Cunningham. “The record-breaking donations received from the 2019 campaign will enable us to provide more than 2.1 million meals for hungry North Texans. We are truly grateful to the many restaurants and diners who support our mission through DFW Restaurant Week each August. Thanks to them, we are able to put more food on the table for neighbors in need across North Texas.”

The following restaurants are recognized as the DFW Restaurant Week Star Restaurants 2019 | Dallas Area, shown in order of largest charitable donations to NTFB.

For the 10th consecutive year. Pappas Bros. Steakhouse in Dallas is awarded the campaign’s top Star Restaurant Award, with the highest overall charity donation of the year: $54,933 for NTFB!

5. The Mansion on Turtle Creek

“We are absolutely thrilled with the million dollar results and are so grateful to the Tarrant County community for the ongoing support,” said Lena Pope’s newly announced CEO Ashley Elgin, Ph.D. “DFW Restaurant Week is a true win-win -- backing our area restaurant businesses and also supporting local children and families with every meal. The nearly $290,000 Lena Pope received from the 2019 campaign will be invested in our mental health, behavioral intervention and educational services that improve child well-being here in Tarrant County.”

The DFW Restaurant Week Star Restaurants receiving the Bigger Portion Award, recognized for the greatest percentage increases in charitable contributions from 2018 to 2019:

These first-time restaurants demonstrating extraordinary enthusiasm and support were chosen by DFW Restaurant Week for its Newbie of the Year Award:

The North Texas Food Bank (NTFB) is a top-ranked nonprofit hunger-relief organization operating a state-of-the-art volunteer and distribution center in Plano— the Perot Family Campus. Last year, the Food Bank worked hard in partnership with member agencies from our Feeding Network to provide access to almost 77 million nutritious meals across a diverse 13-county service area— this means more than 200,000 meals per day for hungry children, seniors and families. But the need for hunger relief in North Texas is complex and in order to meet the need the NTFB is working to increase our food distribution efforts. Our goal is to provide access to 92 million nutritious meals annually by 2025. NTFB is a member of Feeding America, a national hunger relief organization.

Lena Pope believes that children are an asset with unlimited potential deserving of investment. Since 1930, Lena Pope has worked to improve child well-being in Tarrant County. Lena Pope provides evidence-based, researchtested programs focusing in prevention and early intervention services that support child development and improve the behavioral and mental health of children and families. Lena Pope uses investment from the community to change lives, families and Tarrant County. 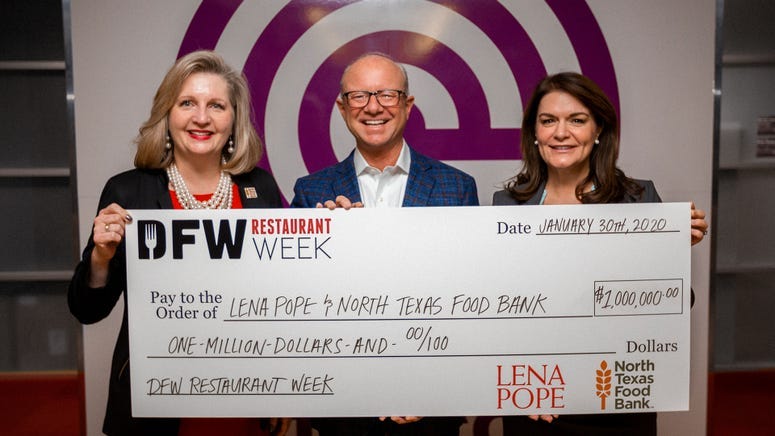