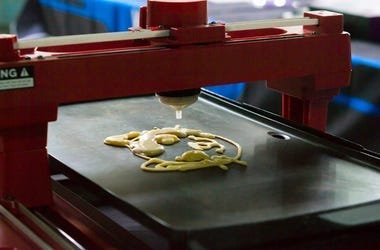 With approximately a third of the food produced in the world each year going to waste, a Dutch company has found an innovative way to give the discarded edibles a new lease on life.

Upprinting Food helps turn food waste, consisting mostly of old bread or fruits and vegetables considered “too ugly” to sell in markets, into a paste which can be used to make 3D printed cookies and snacks.

The company is the brainchild of Dutch designer Elzelinde van Doleweerd, who got the idea while studying at the University of Eindhoven.

At first, Doleweerd used bread as its the most wasted food in the Netherlands. After adding spices and herbs for flavoring, she smashed the compound into a syringe and injected it into a printer. The resulting puree is then baked and dehydrated to extend its shelf life.

After showing her experiment at exhibitions, she teamed up with business partner Vita Broeken to launch the start-up.

“With Upprinting Food, we are creating an attractive food experience from food which otherwise would have been thrown away,” the duo told Digital Trends. “We create a printable puree from those residual food flows and print it in nice shapes to make it look attractive again. After printing, we bake it and dehydrate it to create a crunchy structure [with a> long shelf life.”

The company has come out with various sweet and savory recipes, including Sweet Banana Bread and Crunchy Carrots, which are made from 75% reusable foods.

The entrepreneurs are now working with high-end restaurants to help reduce their residuals food flows and to come up with unique dining experiences for customers.

“Our first step is to upscale the printer, to make it less time consuming for restaurants to create enough 3D printed samples for their quests,” the co-founders added. “In the future, we also want to focus on the retail and wholesalers, to make a larger impact and reduce more food waste.”

Brought to you by Metroplex Cadillac Dealers