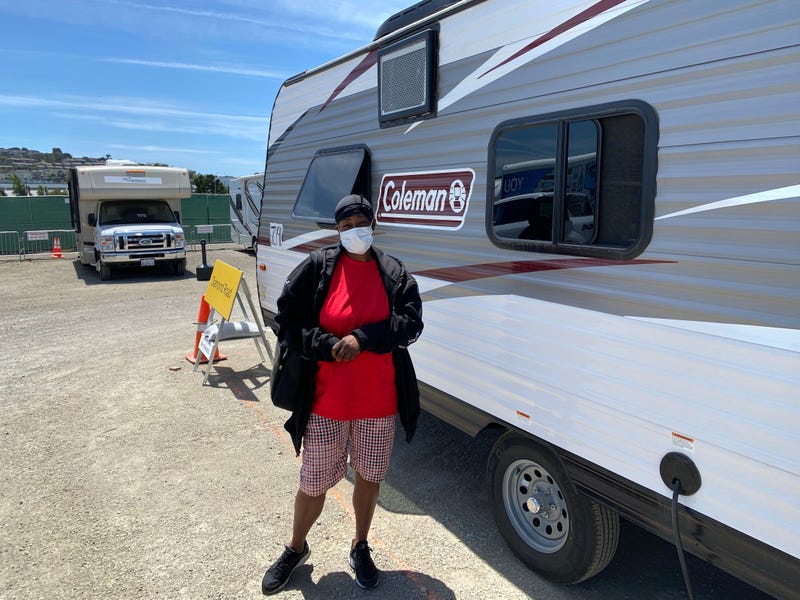 It has been six years since Tina Owens had her own place.

Most recently, she slept in a tent provided by the Bayview community organization Mother Brown’s. The drop-in center doesn’t have a permit to provide beds, but people come for meals and showers and they spend the night in chairs.

When Mother Brown’s was told to reduce its capacity from more than 100 to 30 to allow for social distancing, it set up an informal tent encampment in a local park.

The organization’s CEO, Gwendolyn Westbrook, told KCBS Radio park rangers ordered the tents to be taken down. Westbrook and other advocates waited for two weeks, then put the tents back up. Eventually, Mayor London Breed offered the use of trailers FEMA had provided that were parked at Pier 94.

For Owens, it is a bright side to the pandemic.

"Believe it or not, this COVID thing made things a lot easier for us, being homeless, because everything speeded up," she explained. "They made sure we were off the streets. They made sure that everybody was somewhere."

But there are still thousands who have not been moved indoors.

At the time of writing, the city has housed more than 1,400 unsheltered people. The Board of Supervisors passed legislation requiring the city to acquire 8,250 hotel rooms.

The interim head of the Department of Homelessness and Supportive Housing, Abigail Stewart-Kahn, said there is only FEMA funding available to house people who meet certain criteria. They include those 60 and older, people with underlying medical conditions, and those who ha