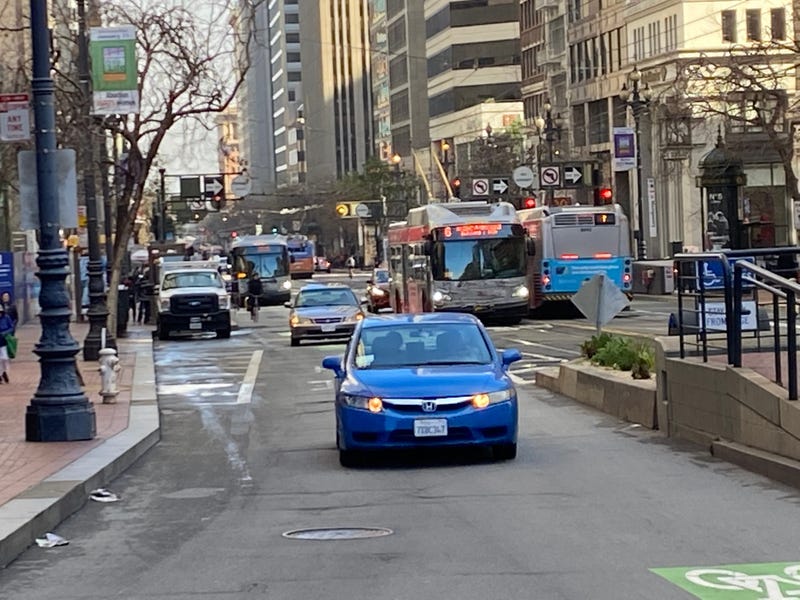 SAN FRANCISCO (KCBS Radio) - The days of hailing an Uber or Lyft along San Francisco's biggest thoroughfare are almost over.

Market Street is going car-free on Wednesday, which means Uber and Lyft will no longer be able to pick up or drop off passengers on what is the most busy street for the ride apps in the city.

Instead, their drivers will get pushed to side streets while buses and taxis retain the right to ply Market Street.

It's all part of the "Better Market Street Project," whose website says it will provide "transformative transportation, streetscape and safety improvements," in part, by going mostly car-free westbound from Steuart Street to Van Ness Avenue and eastbound from 10th Street to Main Street.

Commercial trucks, like cabs and buses, will also be allowed to traverse Market Street. There will be peak hour loading restrictions however, aimed at keeping conflicts between bicyclists, transit vehicles and commercial vehicles to a minimum.

Uber driver Ray Eldridge has taken the news that he'd be picking up his Market Street calls on side streets from now on in stride.

"San Francisco is going to be what it's going to be," he told KCBS Radio. "You'll just have to figure out what corner to meet at. It's more an inconvenience for the passenger than us."

Eldridge noted that many of his passengers often hike around a bit looking for him and his vehicle when he arrives at a given destination. "I've had passengers walk from halfway up the street to where I'm sitting at, because that's the address they put in there," he said.

Uber and Lyft are changing their apps to digitally close off Market Street, which, according to public data cited by the San Francisco Examiner, is the busiest hub in the city for ride-hail services.

Taxi drivers on Tuesday morning told KCBS Radio the change is a good thing for them.

Tune into KCBS Radio Wednesday for our special live broadcast from along Market Street, featuring reporters, anchors and traffic anchors on the scene of one of the biggest changes to hit San Francisco in decades.