All this week KCBS Radio is examining how the pandemic is affecting the people who harvest and process food in the Central Valley.

In part one, a nonprofit manager shares how he pivoted his organization when needs changed drastically. In part two, workers speak out about high-risk conditions on the job. In part three of this special series, Kathy Novak introduces us to some of the people who pick our fruit.

Mauro Santos Diaz is a crew leader at a vineyard outside of Fresno, where workers are picking grapes and laying them out to be dried into raisins.

He explains that grape pickers are paid by volume.

We cannot see the end of the row from where we are standing.

But he says the harvest has been on the light side this year. Fewer grapes mean less money in the pockets of families already struggling during the pandemic.

Maria Sanchez lives in Cantua Creek and has health issues, so she can’t work.

"Sometimes when you pay the rent, then you can’t pay for other things," she said. "That is difficult." 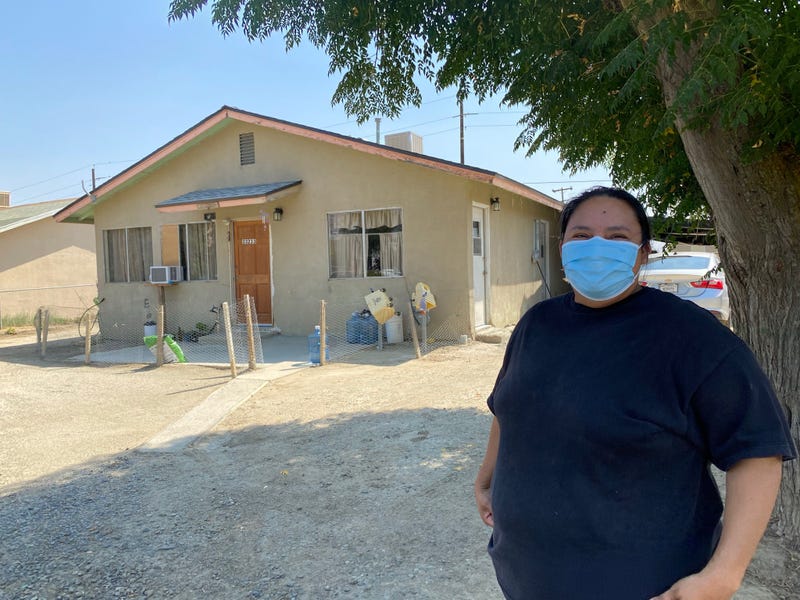 Because her husband’s hours in the fields have been cut, she has had to pull her sons out of college so they can also pick fruit to help out.

"I feel bad because I want them to study," she said. "I want them to have careers and earn more money, not work in the fields all day for about $14 an hour."

Nayamin Martinez, the Director of the Central California Environmental Justice Network, interviewed farmworkers early in the pandemic for the COVID-19 Farmworker Study.

"That was the common denominator," she explained. "People were struggling to be working the same amount of hours they were working at that time of the year."

She said she heard from some people that crews had grown from 30 to 40 people to closer to 100, as workers who lost jobs in other sectors returned to the fields.

"Because there is more labor, then they are able to finish the work faster," she said. "But then that means each worker receives less pay because instead of nine hours it’s just five or four."

Being undocumented adds another challenge, explains this woman who didn’t want to be named.

“If you don’t have documents you don’t get any benefits," she told KCBS Radio. "So you risk getting sick working in the field. Then if you get sick, you have to pay to take a test. They send you home and they don’t pay you for the hours you lose."

She usually gets by working 50 hours a week for about $13 an hour.

But when she showed up to work with cold symptoms, she was told to leave and get a COVID-19 test. That cost her $100 and she lost eight days' pay while waiting for the negative result.

Because her husband was deported in recent years, when she is at work, her five children are left on their own.

The eldest is 18, but it seems like the eight-year-old is in charge.

"I change her diapers and stuff like that,” Martinez said. "Then me and my brother do Zoom class. When we get breaks, I give these two breakfast and lunch."

Showing off a fistful of honor roll medals, it is clear she is doing that.

In part four of this five-part series, we will meet some mothers who had to give up working to look after small children while schools are closed.