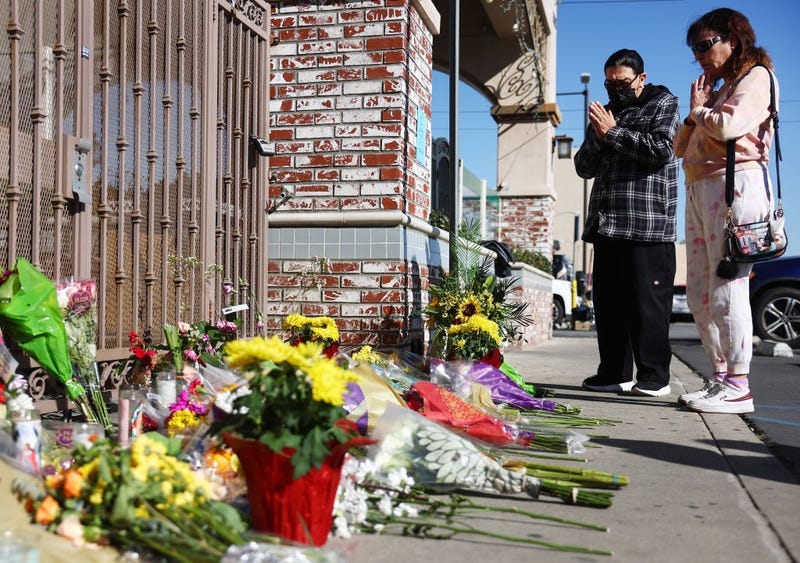 People stand at a makeshift memorial outside the scene of a deadly mass shooting at a ballroom dance studio on January 23, 2023 in Monterey Park, California. Photo credit Mario Tama/Getty Images
By Kris Ankarlo and Natalia Gurevich, KCBS Radio

SAN FRANCISCO (KCBS RADIO) – Investigators are sifting through evidence and surveillance footage to piece together what led to the tragic Lunar New Year massacre in Southern California.

In the meantime, public officials are pointing to the need for better gun control.

A press conference on Monday included several California leaders including Sen. Alex Padilla, who has acknowledged to colleagues that the state does have some of the strictest gun laws in the country, but can still do more.

"When there's a patchwork of laws and protections to various degrees across states, then clearly there are vulnerabilities that can impact any community in the country," he said.

There’s still a lot to be learned about what exactly happened in this case, according to Padilla.

In the meantime, the families of the victims should be provided with as much support as possible.

"To once again use this reminder of the epidemic of gun violence in America," he said.

The Los Angeles County Sheriff’s Office is working with the Monterey Park Police Department as well as federal authorities on the investigation.

Monterey Park Police Chief Scott Wiese made the decision in the wake of this case to send some of his officers home out of concern for their wellbeing, particularly the ones who were first on the scene.

"When they returned to duty, we kind of wrapped our arms around them in briefing," said Wiese. "We brought in professionals from the counseling team and ultimately sent them home."

"I think we all want to find out why," he said. "We all want answers to questions that we may never have answers to."

"That's kind of the enigma of this," he added.

As of Monday afternoon, 11 people have died as a result of the shooting at a Monterey Park ballroom dance hall on Saturday night and 10 more were injured.

The shooting took place during a Lunar New Year celebration. One person was shot outside of the dance studio potentially before the shooting began inside.

The suspect, identified as 72-year-old Huu Can Tran died from a self-inflicted gunshot wound after the shooting. A motive has not yet been identified although is has been reported he had some tie to the dance studio.

A search warrant has been executed on Tran's home in the Inland Empire and police found several items of interest, including a rifle, phones, computers, homemade suppressors and hundreds of rounds of ammunition.

At the scene of the shooting, investigators recovered 42 shell casings and a large capacity magazine.

The gun wrestled away from Tran at the second scene in Alhambra was a 9 millimeter MAC 10.