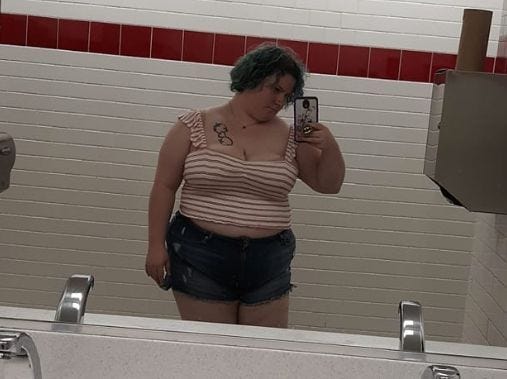 PITTSBURGH (Newsradio 1020 KDKA) - A 25-year-old mother claims that she was asked to leave a Golden Corral restaurant in Erie due to the way she was dressed.

Sueretta Emke told KDKA Radio’s Marty Griffin and Wendy Bell on Monday afternoon that she met up with a friend at the restaurant when the manager approached her. He asked her to go to her car and change her clothing or she would have to leave because a customer complained that she was dressed “too provocatively.”

“I was wearing normal length, you know, nothing showing, jean shorts that were high waisted. Then I was just wearing a white crop top with red stripes,” Emke said. “There was only an inch or two of midriff showing, not anything super crazy.”

“The disturbing part about it, and the reason that I decided to take the advice I was given by a lawyer to share my story, was because they had actually said that they had done this to people before,”  Emke said. “They made the statement that people were happy to do it. I’ve actually had people reach out to me and say that they had similar things at the same restaurant happen to them. They did not seem like they were happy to comply.”

Emke told Marty and Wendy that the only dress code Golden Corral has is for their staff. She reached out to Golden Corral multiple times to talk to someone about her experience. She couldn’t reach any person affiliated with Golden Corral in a position above the franchise owner, who Emke said was “just as bad as his manager.”

A Franchise Business Consultant with Golden Corral sent Emke a letter with several gift cards and apologized for the incident.

“I’m a little bit gun-shy, so to speak, to go to any of them,” Emke admitted when asked if she would go back to a Golden Corral restaurant. “Definitely not that one.”