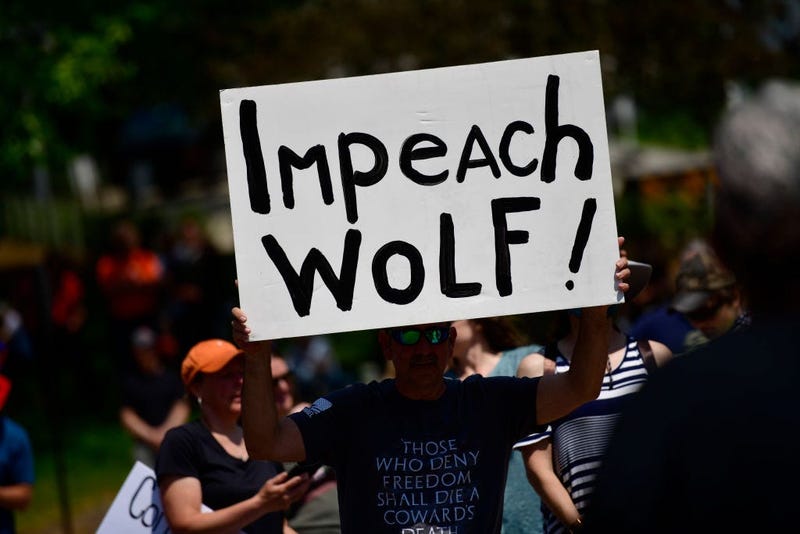 In a statement, Metcalf said Wolf's "unconstitutional dictates and Orwellian overreach into our lives and the marketplace has caused immeasurable harm and hardship for far more Pennsylvanians than the virus!"

Bruce Ledewitz, Law Professor at Duquesne University, told Lynne Hayes-Freeland and Robert Mangino on Wednesday that he expects the impeachment process would likely stop before actual impeachment of Governor Wolf.

"We're much more likely to use impeachment in a kind of political way in Pennsylvania and I don't mean that as a criticism. One way for the legislature to indicate their dissatisfaction with the executive branch or the judicial branch is to begin the process of impeachment and then stop. And we've seen that on many ocassions and I imagine, that's likely to happen in this case too."

Ledewitz said there are pending cases that would overtake impeachment talk. "For example, if the legislature wins its case in commonwealth court and ends the emergency declaration then most people will lose interest in what went on then and you wouldn't impeach or remove a governor once you've resolved everything. I think the matter will move on and I think this is an indication of dissatisfaction in the legislature with the governor's performance.

Given the idea that the impeachment process could be stopped, Lynne asked if this is similar to a vote of no confidence.

Ledewitz said, "It is a little bit like that because unlike the federal system, which has high crimes and misdemeanors and there was a discussion in Washington about what that meant when president Trump was impeached.

"And so, you cannot say that the legislature is acting outside its authority. It certainly is permissible for the legisature to consider the governor's actions to be misbehavior in office. The question is whether it's serious enough to warrant impeachment or removal."

"So being too cautious is unconstitutional and grounds for impeachment?," asked Mangino.

Ledewitz said, "Well, in this case, Representative Metcalfe has couched this, and by the way there are other counts - there are five counts in all - but the first count is the main one and that's the so-called dictatorial count. The governor's actions were upheld by the Pennsylvania Supereme Court and in general terms - this is the DeVito case on April 13th - in general terms it was unanimous. It was a 4-3 vote, but Chief Justice Saylor, who's a Republican, his dissent found the governor's actions generally to be presumtively constitutional and he thought that the waiver process needed to be more transparent.

"But there's no indication that any of the justices on Pennsylvania's Supreme Court thought that the governor was acting in a dictatorial way. Afterall, there really was an emergency. There really was a virus killing people and the virus hasn't gone away it's still there. This idea that it's a violation of our fundamental rights to have to wear a mask in a grocery store is kind of silly to talk about that in terms of fundamental rights."

Mangino asked him to explain the unconsitutional dictates. "The courts don't think so," said Lebewitz. "The courts have not found any of the governor's actions to be unconstitutional and they have been before the courts and the legislature has brought the matter of ending the emergency declarationn before Commonwealth Court and the governor has tried to get the Pennsylvania Supreme Court to excercise its King's Bench authority to get an immediate judicial resolution.