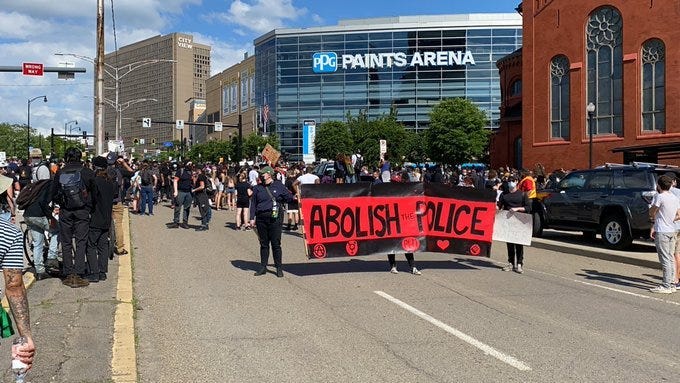 City of Pittsburgh 'NOT Safe' Amid George Floyd Protests

PITTSBURGH (Newsradio 1020 KDKA) - The former Chief of staff to Mayor Bill Peduto and current Senior Vice President and General Counsel for the Pittsburgh Penguins Kevin Acklin claims the violence in the City of Pittsburgh Saturday was started by four white men.

In a post on Facebook Acklin says, “Today’s violence in Pittsburgh was started when 4 white men attacked a parked police car and painted an anarchist symbol on the hood, then lit the car on fire and started painting Soviet symbols on walls. A number of black protestors actually tried to stop them from attacking the police car. We watched the whole thing unfold. Don’t be fooled into thinking who was actually responsible for this peaceful protest turning violent.”

Mayor Peduto also tweeted out a screen shot of Acklin’s post on twitter and said, “Important first hand account from inside PPG Arena. The vandals are not part of the young Black Leadership that organized this March. They are anarchists, hell bent on chaos and destruction. The hijacked a peaceful, march for justice and exploited it for their own selfish agenda.”

A largely peaceful protest erupted into chaos after a police vehicle parked outside of PPG Paints Arena was vandalized with spray paint and set of fire.

The city’s Public Safety department says that multiple officers have been injured along with at least three journalists. It is not clear how many have been hurt.