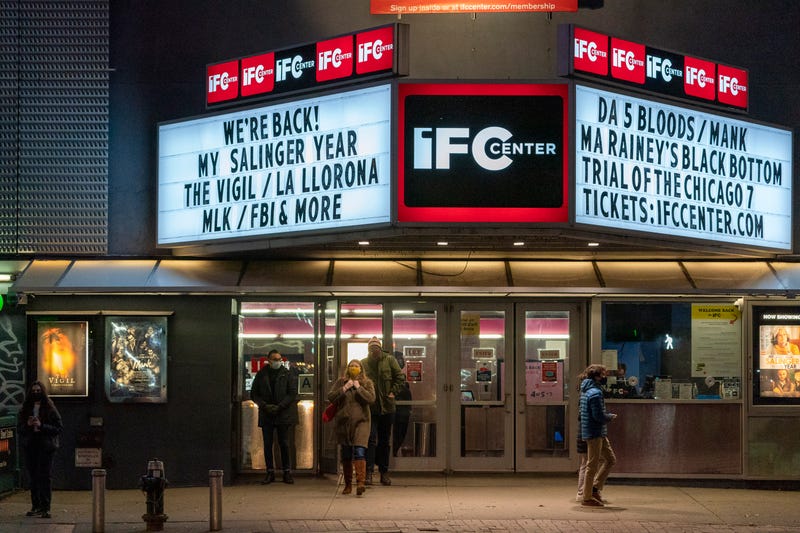 NEW YORK (AP) — After growing cobwebs for nearly a year, movie theaters in New York City reopen Friday, returning film titles to Manhattan marquees that had for the last 12 months instead read messages like “Wear a mask” and “We’ll be back soon.”

Shortly after noon at the Angelika Film Center on Houston Street, Holly Stillman was already feeling emotional coming out of the first New York showing of Lee Isaac Chung’s tender family drama “Minari.” “My mask is drenched,” she said.

But she was equally overwhelmed by being back in a cinema. Though Stillman feared the experience would be too restrictive because of COVID-19 protocols, she instead found it euphoric.

“It was just you and the movie screen,” said Stillman. “It was wonderful to smell the popcorn as soon as I got into the theater — even though I don’t eat popcorn.”

Less than half of movie theaters are open nationwide, but reopenings are quickening. Theaters in many other areas reopened last summer around the release of Christopher Nolan’s “Tenet,” but that attempted comeback fizzled. Throughout, theaters remained shut in the five boroughs. For a year almost to the date, one of the world’s foremost movie capitals stayed dark.

For a theatrical business that has been punished by the pandemic, the resumption of moviegoing in New York — is a crucial first step in revival.

“It’s a symbolic moment,” said Michael Barker, co-president of the New York-based Sony Pictures Classics, which on Friday released the Oscar contenders “The Father” and “The Truffle Hunters” in Manhattan theaters. “It says that there is hope for the theatrical world to reactivate itself.”

For some moviegoers who consider the big screen the only way to see a movie, the long-in-coming day had almost religious significance.

“Moviegoing for me is like going to church,” said JM Vargas, who had tickets Friday to “Minari,” “The Last Dragon” and “Chaos Walking.” “I’ve been waiting a year to go back to church.”

Cinemas in the city are currently operating at only 25% capacity, with a maximum of 50 per each auditorium. As in other places, mask wearing is mandatory, seats are blocked out and air filters have been upgraded.

Many theaters were caught off guard when Gov. Andrew Cuomo said cinemas could, under those conditions, reopen. Some of the city’s prominent theaters, including the Film Forum, the Alamo Drafthouse, the Metrograph and Regal Cinemas were targeting openings in the coming weeks. Some needed more time to prepare. After sitting dormant all winter, the Cinema Village in Manhattan two weeks earlier burst a pipe, flooding the lobby — one last bit of bad luck in a grueling year.

“This was the worst horror movie. I don’t think any Hollywood director could have dreamed it up,” said Nicolas Nicolaou, owner of the Cinema Village and theaters in Queens and New York. “We didn’t realize we’d be 100% shutdown for this long.”

New York, along with Los Angeles (where theaters are still closed), is one of the top movie markets. For smaller films, it’s a vital epicenter of word-of-mouth. For blockbusters, it’s a lucrative necessity. Without New York or Los Angeles open, Hollywood studios have pushed most of their larger productions until more theaters are open, or they’ve steered films to streaming services.

“The New York opening is very significant to the theater business in New York, in the nation and in the globe,” says John Fithian, president of the National Association of Theater Owners. “We in the movie theater business live off of movies that play all around the country and all around the world. We keep seeing those movies leave the theatrical release schedule to move to later dates because there just haven’t been enough markets. New York is the most important of those markets.”

Lately, with President Biden’s prediction that every adult can be vaccinated by the end of May, the outlook for theaters has been brightening for the first time in a long time. Last weekend, “Tom & Jerry” overperformed at the box office with $14.1 million in ticket sales, even while it streamed on HBO Max. Though Universal Pictures pushed the “Fast & Furious” sequel “F9” from late May to late June, other movies have moved up on the calendar, reversing the postponement tide.

Sony Pictures said it will release “Peter Rabbit 2: The Runaway” in May. Paramount Pictures’ “A Quiet Place II” moved into the May 28 date vacated by “F9.” The Walt Disney Co.’s “Black Widow” currently remains slated for May 7. Adding to the optimism: Southern California theaters are expected to reopen over the next few weeks.

But at least on Friday, New York’s cinema lobbies were, if not crowded, again bustling. Sold-out signs for the evening adorned box-office windows. Even a little star power returned. Liam Neeson was to stop by the AMC at Lincoln Square to introduce “The Marksman.”

At the IFC Center in Greenwich Village, masked moviegoers flocked to films to play catch up — even if the movies were streaming. IFC is hosting a four-week “What’d We Miss?” series of movies the theater couldn’t play over the last 12 months, including “First Cow” and “MLK/FBI.”

“We’re used to being present for the birth of these movies for New York audiences when they move into the public realm,” said John Vanco, senior vice president of the IFC Center. The circumstances, he granted, weren’t ideal. But they were better than nothing. “I don’t look at 25% as being not good enough,” said Vanco. “I look at it as better than 0%.”

At the IFC, Tykon Herman settled in for “Ma Rainey’s Black Bottom,” and had tickets for a 5 p.m. of “The Trial of the Chicago 7.”

“I’m one of the very few that don’t have Netflix,” said Herman, laughing. “I’m just old-fashioned. I’ve loved the theater experience from the time I saw ‘E.T.’ It’s not going to be the same but sitting down in front of this screen makes me feel like things may be getting back to normal soon.”