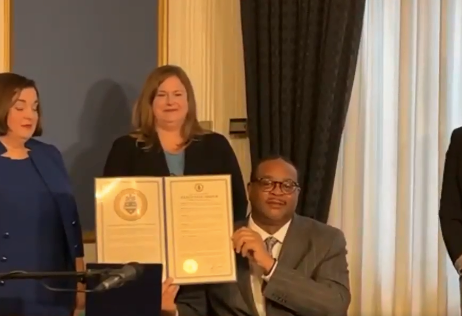 An executive order signed Tuesday morning by Mayor Ed Gainey will begin an examination of which Pittsburgh non-profits must pay property taxes.

The years-long study will start with the largest organizations in city-limits that are considered non-profits. What organizations will be looked at first were not identified.

Each must meet five requirements to be considered a "purely public charity".
Gainey's administration estimates charitable organizations in the city would owe $36 million in property taxes.

2.     Donates or renders gratuitously a substantial portion of its services

3.     Benefits a substantial and indefinite class of persons who are legitimate subjects of charity

4.     Relieves the government of some of its burden

“In the City of Pittsburgh, 34% of the property is designated as tax-exempt, that is, the owners are not paying any property taxes.” said Mayor Ed Gainey. “The only properties that should not be subject to property taxes are those owned by purely public charities – places where people who are down on their luck get the services they need, mostly for free. For example, the new Second Avenue Commons homeless shelter is a huge help to our community, and it is clearly a purely public charity.”

“The City of Pittsburgh is facing a revenue shortfall, especially once the HARPA funds run out in a couple of years and at that point we need to make sure we have enough revenue to pay for our police officers, to pay to pay for our bridges and to pay for our snow plows,” said Kubiak.

One-third of the properties in the city are currently tax exempt. House of worship will be exempt participating.

“This review will not include any churches or religious institutions,” continued Mayor Gainey.  “This work will also not impact the charity’s tax-exempt status under federal law.  They may still qualify as a charity for federal income taxes, but have to meet Pennsylvania’s standards to avoid paying property taxes here in the City.  Additionally, if your favorite charity has to pay property taxes, it doesn’t change the fact that your donations to it will still give you a tax deduction on your taxes.”

The administration adds if a charity you donate to have to pay property taxes that won’t change the ability to give you a tax deduction on your taxes.

The city is also asking help from residents in identifying non-compliant charities by emailing them at report@pittsburghpa.gov.

Featured Image Photo Credit: Office of the Mayor of Pittsburgh