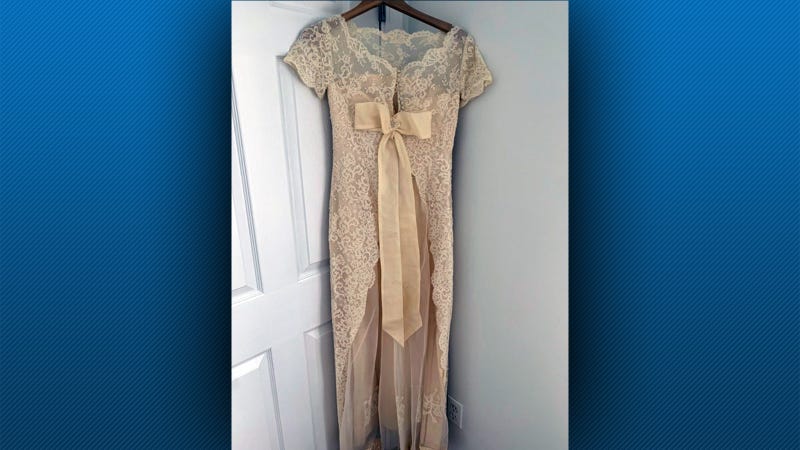 A woman who opened the box containing her wedding dress found a surprise inside.

Jessica Bolger had her wedding dress cleaned and preserved back in 1997 in Pittsburgh, but hadn't opened the box until recently.

Tucked away inside for the last 24 years, along with her dress, was another wedding dress that was not hers.

Bolger told Lynne Hayes-Freeland on News Radio KDKA that the dress has made it through a couple of moves since leaving Pittsburgh and had it not been for a conversation with friends, it may very well still be in the box, unfound.

She said a friend challenged her to open because she said "you have three boys, it's not like any of your future daughter-in-laws are gonna want to wear your dress, why wouldn't you just open it?" She agreed and opened the box.

At first, she admits that she thought it may have been the dress that her mother wore at the time, but after looking at wedding photos and the dress more closely, that's when she knew it was someone's wedding dress.

"When we opened this box," she explained, "we all stood there probably two minutes, mouths open, no one said a word."

She continued, "How is it possible that I have a dress here that isn't mine? And worse, someone out there ha a box that doesn't have their dress in it or its empty."

Bolger is on the hunt to reunite the dress with its owner.

She posted photos of the dress on her Facebook page asking for help spreading the word.

She says the wedding would have likely taken place in July of 1997 and she believes the cleaning company was Edgewood Cleaners, but says it could have been other in the Squirrel Hill, Edgewood and Churchill areas of Pittsburgh.

Calling all Pittsburgh peeps! Crazy story...opened my wedding dress box after 24 years and there was a second dress in...

Posted by <a h