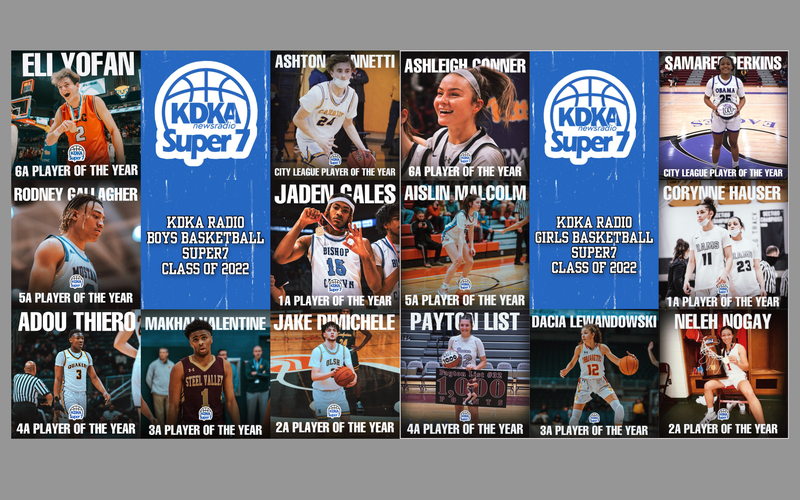 The following 14 student-athletes had standout seasons on the court, with many leading their teams to championships and deep playoff runs, while establishing themselves as the top individual talents in the region.

WPIAL Class 6A
Eli Yofan, Fox Chapel: Yofan, a senior, led the Foxes to the WPIAL title and the PIAA semifinals by scoring nearly 20 points per game, grabbing almost six rebounds per game and dishing out nearly three assists per. Yofan became the all-time scorer in Fox Chapel history this season and has offers from Navy, Army and is receiving interest from other DI and DII schools.

WPIAL Class 5A
Rodney Gallagher, Laurel Highlands: Gallagher, a junior, is one of the top multi-sport recruits in WPIAL history. This season, he averaged over 18 points per game, while adding around four assists and rebounds per game. Gallagher knocked down the winning free throws to claim the WPIAL 5A championship. He has several college basketball offers, but has decided to play football and is a four-star recruit.

WPIAL Class 4A
Adou Thiero, Quaker Valley: The senior averaged 23.3 points, 10.3 rebounds, 5.9 assists, 3.9 steals and 2.3 blocks per game to lead the Quakers to the WPIAL 4A Championship, the school’s first title in 25 years. Thiero scored 31 points, grabbed 17 rebounds and had seven blocks in the title game win over Montour. He finished his career with over 1,600 points and has picked up offers from Pitt, Kentucky, Maryland, Xavier, Cincinnati and Duquesne.

WPIAL Class 3A
Makhai Valentine, Steel Valley: Valentine wrapped up the season as the district’s fourth-leading scorer at 29.4 points per game. The junior helped the Ironmen reach the WPIAL quarterfinals thanks to a 23-point effort against No. 4 seed Seton LaSalle in the first round. He has started to received interest from NCAA DII and DIII schools.

WPIAL Class 2A
Jake DiMichele, OLSH: DiMichele finished his career with 2,642 points, second-most in WPIAL history. He made the fourth-most 3-pointers in the district’s history (301), as well. DiMichele finished second in scoring in the WPIAL the season, scoring around 32 points per game. In his career, OLSH went 103-4 and won four WPIAL titles and two PIAA championships, and is currently on a Pennsylvania record 68-game winning streak. DiMichele has offers from NCAA DII schools California (Pa.), Seton Hill and West Liberty, and Robert Morris has offered him a walk-on position.

WPIAL Class 1A
Jaden Gales, Bishop Canevin: Gales was the leading scorer at over 14 points per game in a balanced attack from the Crusaders, which racked up 25 wins and won WPIAL and PIAA titles. The 6-foot-6 senior had a double-double in the PIAA championship with 14 points and 12 rebounds to help the Crusaders to its first state title. Gales has an offer from NAIA school Point Park and has received interest from several other colleges.

WPIAL Class 6A
Ashleigh Connor, Mt. Lebanon: Connor finished the year as the seventh-leading scorer in the WPIAL. A Saint Louis recruit, she scored 21 points per game, and grabbed over eight rebounds per game. Her 23 points against Upper St. Clair led the the Blue Devils to the WPIAL 6A title. The senior also paced Mt. Lebanon in the PIAA playoffs, helping the Blue Devils make it to Hershey.

WPIAL Class 5A
Aislin Malcolm, Chartiers Valley: One of the top rated recruits in the country, the Pitt recruit capped an excellent career with just seven losses in four years. She scored over 16 points per game this year and was one off the top 3-point threats in Pennsylvania, hitting 83 from beyond the arc. Malcolm’s 1,770 points are the most in school history. She picked Pitt over other Power 5 schools ini Northwestern, Boston College and Penn State.

WPIAL Class 4A
Payton List, Beaver Area: List is of the most well-rounded athletes in WPIAL history. She is currently staring as a pitcher on the softball diamond in a sport in which she is committed to play at Virginia Tech next year. But List is also an exceptional volleyball player and, of course, a top player on the basketball court. She finished fifth in the district with 23.2 points pregame. Beaver went 16-6 and reached the WPIAL 4A quarterfinals.

WPIAL Class 3A
Dacia Lewandowski, North Catholic: The junior, who is committed to Akron, scored 15.8 points per game the season, leading the Trojanettes to a WPIAL championship and PIAA semifinal appearance. Marshall, Toledo and Navy have also offered her scholarships. Lewandowski’s sister, Kylee, is currently playeing at Richmond and her father, Joe, has coached with USA Basketball and most recently with Point Park University.

WPIAL Class 2A
Neleh Nogay, Neshannock: The point guard of the Lancers, Nogay was an assist machine in Neshannock’s run to WPIAL and PIAA titles. Neshannock, which finished 29-2, was one of just two public schools to win PIAA basketball titles this year. In addition to her passing, she also scored 12.4 points per game and went over the 1,000 point mark in her career. Nogay is committed to Fordham to play softball.

WPIAL Class 1A
Corynne Hauser, Rochester: Hauser was the WPIAL’s leading scorer this year at 25.3 points per game. She also dished out six assists and snagged five steals per game. Hauser helped the Rams to 16 wins and a quarterfinal appearance this year and finished with 1,718 career points, second-most in school history. In November, she committed to play collegiately at Kent State.

City League
Samaree Perkins, Obama Academy: A 1,000 point scorer who paced Obama to a City League title, Perkins scored over 15 points per game this year. In the City League championship, she scored 21 points and pulled down 16 rebounds in a 58-40 win over Allderdice. The senior is also a standout volleyball player and could play either sport in college. Her older sister, Javonna, plays volleyball at Carlow University.