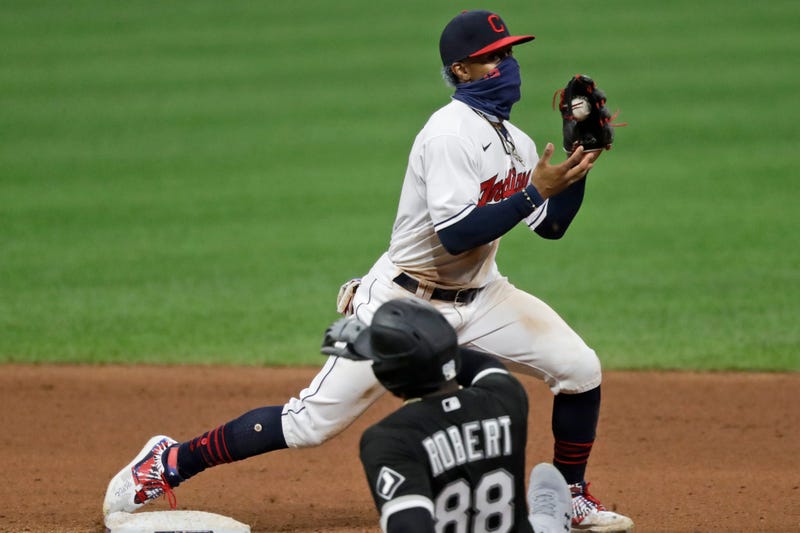 Photo credit Cleveland Indians' Francisco Lindor gets Chicago White Sox's Luis Robert at second base in the seventh inning in the second baseball game of a doubleheader, Tuesday, July 28, 2020, in Cleveland. (AP Photo/Tony Dejak)
By The Associated Press

Baseball players just might not want to play nine innings twice in one day during this pandemic-delayed season.

While Cleveland swept the Chicago White Sox in the first doubleheader of the season on Tuesday, union head Tony Clark called Deputy Commissioner Dan Halem and said players might want to consider shortened twinbills this year.

The players’ association is surveying members and may propose either two seven-inning games for a twinbill or nine innings for the opener and seven for the nightcap.

Major League Baseball is checking opinions at the owner and general manager levels, and staff hopes for a decision by Saturday to make a change or leave the rules the way the are.

Philadelphia and Toronto are scheduled for a doubleheader on Saturday as the Phillies resume play following a five-day layoff. The time off was caused by waiting to make no players or staff were infected during games against the Miami Marlins last weekend.

“I like nine and nine, personally,” Yankees reliever Adam Ottavino said Wednesday. “I don’t want to be marginalized out of the game, Once we go seven-inning games, slippery slope there.”

Official Baseball Rules allow minor leagues to adopt a rule providing one or both games of a doubleheader be seven innings. NCAA rules allow the options of two nine-inning games, a seven and a nine or two sevens.

The union’s survey was first reported by The Athletic.

“Right now, I don’t think it’s necessary based on how this season has been set up,” Los Angeles Angels manager Joe Maddon said. “If the doubleheaders were to pile up for whatever reason, I would have it like in a contingency plan."

Given modern usage of pitchers, Maddon said the shortened game would be the equivalent of starting the games in the third inning. He could bring in relievers earlier.

“You just get into that ninth inning a lot sooner. The sixth inning, the fifth inning play differently based on when the game is supposed to conclude,” he said.

“You just accelerate what you’re doing, just like we’re doing with the season. So I get it from the perspective of expediency, if it’s necessary. ... I’m in for anything right now. I’m not going to speak badly of any kind of suggestion right now that people believe is going to help us get through the season, get through the playoffs and conclude them," he said.

MLB already has adopted one shortening rule for 2020: Each half of each extra inning starts with a runner on second base.

There were five extra-inning games during the first six days of the season. Four ended in 10 innings and one in 11.