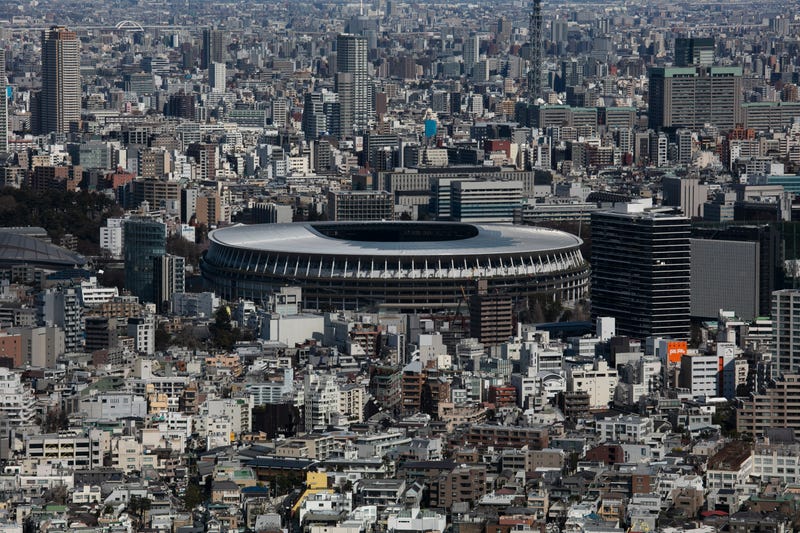 Photo credit FILE - In this March 3, 2020, file photo, the New National Stadium, a venue for the opening and closing ceremonies at the Tokyo 2020 Olympics, is seen from Shibuya Sky observation deck in Tokyo. The tentacles of cancelling the Tokyo Olympics — or postponing or staging it in empty venues — would reach into every corner of the globe, much like the spreading virus that now imperils the opening ceremony on July 24. (AP Photo/Jae C. Hong, File)
By The Associated Press

TOKYO (AP) — The tentacles of canceling the Tokyo Olympics — or postponing or staging it in empty venues — would reach into every corner of the globe, much like the spreading virus that now imperils the opening ceremony on July 24.

The International Olympic Committee and local organizers say the games are on, but the clock is ticking.

The fate of the Tokyo Games touches 11,000 Olympic and 4,400 Paralympic athletes, coaches and sports officials, local organizers, the Japanese government and national morale, international broadcasters, fans and world sponsors. Add to this hotels, airlines and taxi drivers — and even 80,000 unpaid volunteers who will miss a once-in-a-lifetime opportunity.

“I've heard things about possibly the Olympics being canceled, and I think that would stink," J'den Cox, a two-time world champion wrestler and an Olympic bronze medalist in Rio de Janeiro, told The Associated Press. “It would probably break everybody's heart if that were to happen."

The Olympic brand could be damaged, although the Switzerland-based International Olympic Committee may be among the least affected parties financially if the games are called off. The IOC has been resolute in its message, although it has a several-month window to decide.

“Hard to imagine this will be defined by the end of May, but it could be,” Dr. Ali Khan. an epidemiologist and dean of the College of Public Health at the University of Nebraska, told the AP in an email. “Regardless, numerous sick athletes could not lead to a very interesting games.

“From what we know from numerous other mass-gathering events including sporting events, it is very easy to spread diseases worldwide from such events — from meningitis to Zika," Khan added. “Besides welcoming athletes and spectators with their tiny microbes, there is and may be ongoing disease in Japan.”

Kazuhiro Tateda, an expert on infectious diseases and a member of a Japanese government panel, said the virus may not die out quickly.

"Unlike the flu that disappears with warmer weather, the response to the new coronavirus, I think, will have to continue for half a year or a year,” Tateda told Japanese broadcaster NHK on Tuesday.

The IOC has ample financial safeguards against cancellation, which has happened only in wartime since the modern Olympics began in 1896. Its latest annual report shows it has almost $2 billion in reserve that could cover running costs until the 2022 Winter Olympics in Beijing.

The IOC's annual reports show it paid almost $14.4 million in an insurance premium to protect against canceling the 2016 Rio Olympics and $12.8 million for a policy to cover the 2018 Winter Olympics in Pyeongchang, South Korea.

IOC President Thomas Bach was asked last week after an executive board meeting if the insurance premium has risen to as much as $20 million for a Tokyo policy.

Wolfgang Maennig, an Olympic rowing gold medalist who teaches sports economics at Hamburg University, said the losses will be shared.

“Insurance companies will have to pay a large amount of the losses of the IOC," Maennig said in an email to the AP. “The rest will have to be borne by the IOC.”

The IOC controls the Olympics and has wide latitude to act. Its protection is spelled out in the 81-page Host City Contract, signed in 2013 with the city of Tokyo and the Japanese Olympic Committee.

The preamble to the contact states: “the Olympic Games are the exclusive property of the IOC which owns all rights ... to their organization, staging, exploitation, broadcasting, recording, representation, reproduction ... whether now existing or developed in the future, throughout the world in perpetuity.”

The contract also specifies that the IOC can terminate and withdraw from the city because of a “state of war, civil disorder, or boycott ... or if the IOC has reasonable grounds to believe, in its sole discretion, that the safety of participants in the games would be seriously threatened or jeopardized for any reason whatsoever."

Victor Matheson, a sports economist at the College of the Holy Cross in Worcester, Massachusetts, said athletes are the most vulnerable. The Olympics feature 33 sports, and many of the smaller ones have a limited following until games time.

"For athletes, their career length isn’t long and in many sports success in the Olympics is your one shot at a financial return," Matheson told the AP.

Matheson said losses by hotels and other service businesses are unlikely to be insured. The billions on government spending on venues looks like a risky investment. The loss of the Olympics would negate the difficult-to-calculate goodwill that Japan and Tokyo might have won.

An Irish bookmaker is showing odds leaning slightly toward the Olympics not going forward. Odds are 4-6 it will not open on July 24 in Tokyo, and even that it will.

Tokyo is officially spending $12.6 billion to organize the Olympics, although a national government audit office says it's at least twice that much. The local organizing committee budget of $5.6 billion is private money, with the rest coming from Japanese taxpayers. About $1 billion in the local operating budget is to come from ticket sales, which would be lost if the games go ahead without fans in empty stadiums.

“Some combination of the IOC, the broadcasters, and the insurers will lose big,” Matheson said. “That loss is coming out of someone’s pocket depending on how all of the contracts are written.”

Andrew Zimbalist, who teaches economics at Smith College in Northampton, Massachusetts, said some of the venues, such as the $1.43 billion national stadium, would have “enduring value.”

“But virtually none of it would have made the list of the priority public investments,” he said in an email to the AP, adding that if the games were canceled, much of the investment would be “wasted.”

The IOC has said repeatedly the games will go on, and says it relies on advice from the World Health Organization. The WHO, the U.N. health agency, has so far resisted describing the crisis as a “pandemic," which could force the IOC's hand. But many experts say that threshold has already been met.

More than 113,000 people have been infected worldwide from the virus, far more than those sickened by SARS, MERS or Ebola in recent years. More than 4,000 have died.

For most people, the new coronavirus causes only mild or moderate symptoms. For some, especially older adults and people with existing health problems, it can cause more severe illness, including pneumonia.

The vast majority of people recover from the new virus. According to the WHO, people with mild illness recover in about two weeks. Those with more severe illness may take three to six weeks to recover. In mainland China, where the virus first exploded, more than 80,000 people have been diagnosed and more than 63,000 so far have recovered.

About 73% of the IOC's income of $5.7 billion in the latest four-year Olympic cycle (2013-2016) was from selling broadcast rights. The U.S. network NBC makes up at least half of the broadcast payments. Another 18% of IOC income is from sponsorships.

NBC parent company Comcast said that because of insurance and the way contracts are written, NBC won’t suffer losses if the Olympics are canceled. But Comcast CEO Brian Roberts said the company would miss out on ad-driven profits, which were $250 million for the 2016 Rio Olympics. The ad profits for 2020 are expected to be larger.

Christopher Chase, an attorney based in New York who specializes in sports, intellectual property and media, said sponsors and broadcasters were unlikely to sue for breach of contracts if the games are not held, or the conditions were changed.

Chase, a partner in the law firm Frankfurt Kurnit, said many such contracts would have “force majeure” or “changed circumstances” clauses that spell out unforeseeable conditions that keep a contract from being fulfilled; these act as a defense for non-performance by either party, but in this case, more likely the event producer.

Over and above the IOC's major sponsorship deals, local sponsors have paid just over $3 billion to the organizing committee.

“Any party that has already spent money to put people on the ground, flights and hotel rooms and all those types of things, are most likely going to lose out on that,” Chase said. "The sponsorship fee may be the least of their concerns.”