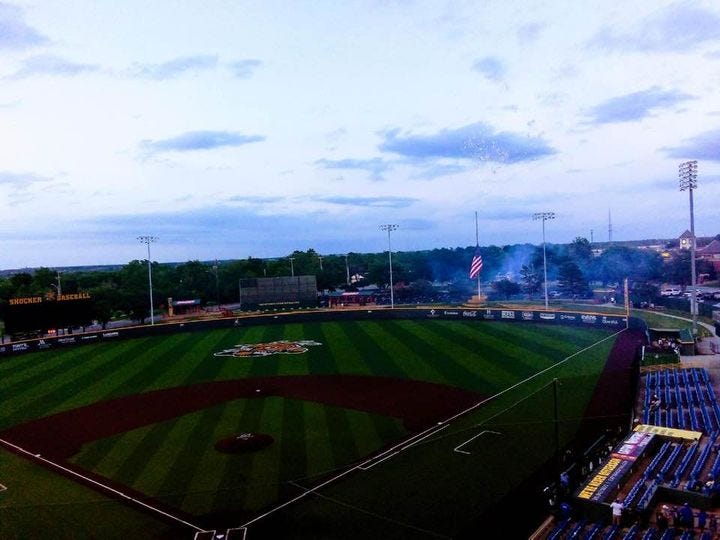 Three Wichita State pitchers combined on a six-hit shutout as the Shockers opened the final home series of the season with a 2-0 win over Tulane on Friday night at Eck Stadium.

Wichita State got all the offense they would need in the first four hitters of the game. Brock Rodden reached on a one-out infield single, and Sawyre Thornhill drove him home with a triple that banged high off the left field fence. Jordan Rogers followed with a ringing double to the gap in left-center, plating Thornhill for the final run of the evening.

Favors handed the ball off to Kaminska in the fourth, who cruised through the next three innings before running into trouble in the seventh. Tulane got a leadoff single and a one-out walk to put men at first and second with one out, but Kaminska (3-7) silenced the threat on a fly out and a strikeout to preserve the 2-0 lead.

In the eighth, Tulane (30-20-1) threatened with two outs, as Bennett Lee doubled and Brady Marget coaxed a walk. Kaminska once again had the answer, inducing a fly out from Jackson Linn to escape the inning. Kaminska returned to the mound for the ninth, retiring the first hitter on strikes before issuing another walk that ended his evening. Closer Connor Holden made quick work of the next two Green Wave hitters, fanning Trevor Minder and getting Brennan Lambert on a bouncer back to the mound to nail down his fifth save.

Tulane starter Dylan Carmouche (5-3) settled in after the rocky first to toss 7.2 strong innings, striking out six while walking two. He allowed only three hits from the first inning on.

Shocker pitchers combined to strike out 12 on the evening, and did not allow a Tulane runner to reach third base.

The series continues on Saturday afternoon. First pitch of game two is scheduled for 2:00 pm.