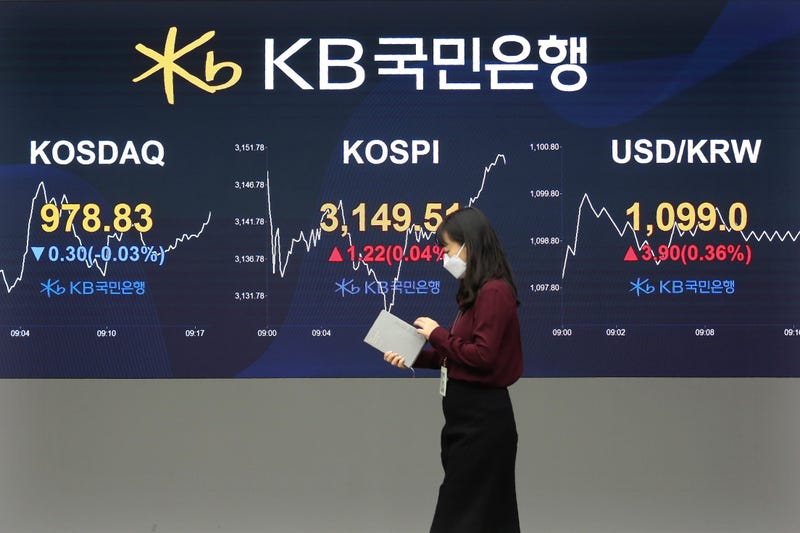 Photo credit A currency trader passes by monitors showing the Korea Composite Stock Price Inde, and foreign exchange rate at the foreign exchange dealing room of a KB Kookmin Bank branch in Seoul, South Korea, Thursday, Jan. 14, 2021. Shares were mostly higher in Asia on Thursday after a lackluster day on Wall Street, where major indexes spent the day drifting up and down near their record highs. (AP Photo/Ahn Young-joon)
By The Associated Press

Shares were mostly higher in Asia on Thursday after a lackluster day on Wall Street, where major indexes spent the day drifting up and down near their record highs.

Benchmarks rose in Hong Kong, Tokyo and Sydney but fell in Shanghai.

U.S. futures were trading slightly higher after the U.S. House of Representatives voted to impeach President Donald Trump on the charge of “incitement of insurrection.”

Democrats and even some Republicans concluded that Trump incited an insurrection after he encouraged a mob of loyalists who went on to attack the Capitol last week. The voting concluded after the close of regular trading.

Investors have been looking past such political turmoil for the most part, though, focusing instead on expectations for a stronger economy ahead. President-elect Joe Biden is expected later Thursday to release details of his plan to support the economy. They could include bigger cash payments to most Americans.

In Asia there was little in the way of market affecting news or data releases.

Treasury yields stalled after rising sharply since the beginning of the year. The benchmark 10-year yield dipped as concerns calmed that the Federal Reserve may curtail its purchases of Treasurys. Expectations of higher government spending and the possibility of inflation have helped drive bond yields higher.