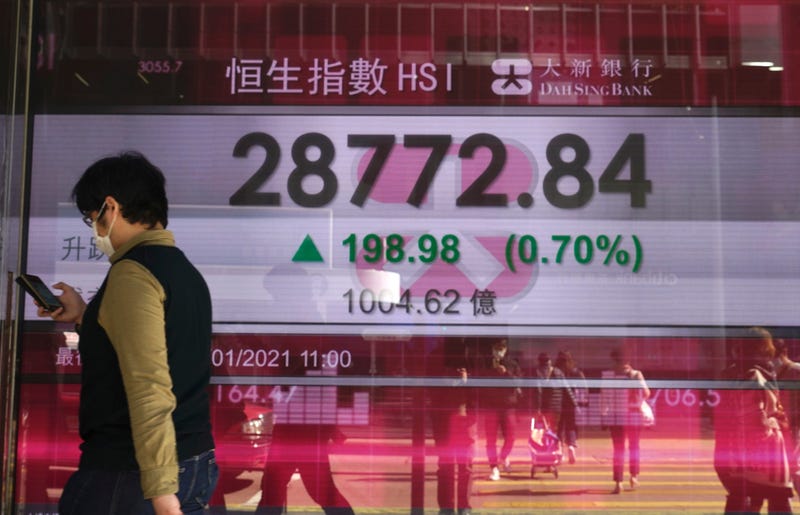 Photo credit A woman walks past a bank's electronic board showing the Hong Kong share index at Hong Kong Stock Exchange Monday, Jan. 18, 2021. Shares fell Monday across most of Asia following a retreat on Wall Street, but benchmarks in Hong Kong and Shanghai rose after data showed the Chinese economy grew a solid 2.3% in 2020. (AP Photo/Vincent Yu)
By The Associated Press

Shares fell Monday across most of Asia following a retreat on Wall Street, but benchmarks in Hong Kong and Shanghai rose after data showed the Chinese economy grew a solid 2.3% in 2020.

The stronger than expected performance for the world's second-largest economy helped counter growing wariness among investors over deepening economic devastation from the pandemic around the globe.

China was the first country to suffer outbreaks of the new coronavirus and the first major economy to begin recovering as meanwhile the U.S., Europe and Japan are struggling with outbreaks.

U.S. futures also were lower. Markets are closed in the U.S. on Monday for Martin Luther King Jr. day.

China's National Bureau of Statistics said growth in the three months ending in December rose to 6.5% over a year earlier, up from the previous quarter’s 4.9%. The economy contracted at a 6.8% pace in the first quarter of 2020 as the country fought the pandemic with shutdowns and other restrictions.

Some measures showed a slowing of activity in December, but “The big picture is still that activity remains strong, which is helping to support the labor market," Stephen Innes of Axi said in a commentary.

Treasury yields also dipped as reports showed shoppers held back on spending during the holidays and are feeling less confident, the latest in a litany of discouraging data on the economy.

Friday was the first chance for traders to act after President-elect Joe Biden unveiled details of a $1.9 trillion plan to prop up the economy. He called for $1,400 cash payments for most Americans, the extension of temporary benefits for laid-off workers and a push to get COVID-19 vaccines to more Americans.

That fit investors’ expectations for a big and bold plan, but markets had already rallied powerfully in anticipation of it.

Biden’s Democratic allies will have control of the House and Senate, but only by the slimmest of margins in the Senate. That could hinder the chances of the plan’s passage.

The urgency for providing such aid is ramping by the day. One report on Friday showed that sales at retailers sank by 0.7% in December, a crucial month for the industry. The reading was much worse than the 0.1% growth that economists were expecting, and it was the third straight month of weakness.

For many investors the big question is what ramped up government spending may mean for interest rates and inflation.

Treasury yields have been climbing on expectations the government will borrow much more to pay for its stimulus, in addition to improved economic growth and higher inflation. The yield on the 10-year Treasury zoomed above 1% last week for the first time since last spring and briefly topped 1.18% this week.

Higher interest rates could divert some investments away from shares and into bonds. The yield on the 10-year Treasury was steady at 1.09%.