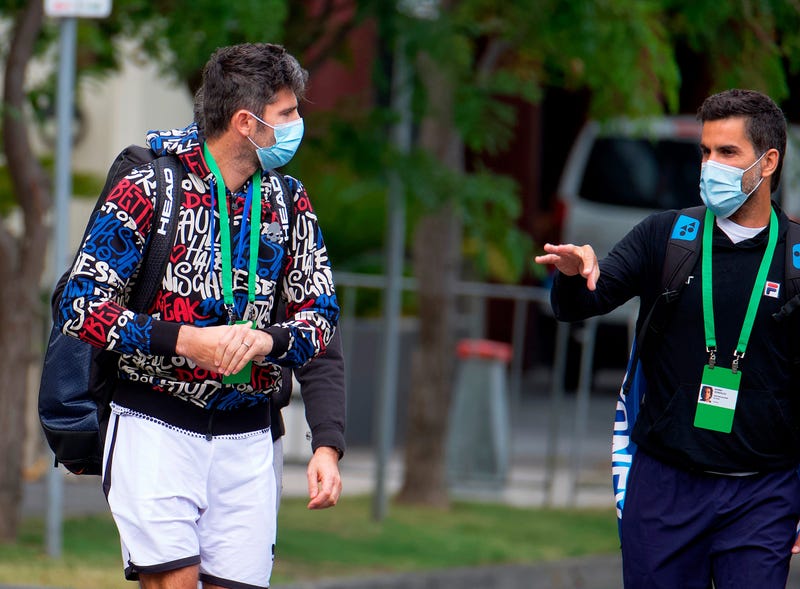 Photo credit Italian tennis player Simone Bolelli, left, and Argentina's Maximo Gonzalez are escorted to their training session in Melbourne, Australia, Monday, Jan. 18, 2021. The number of players in hard quarantine swelled to 72 ahead of the Australian Open after a fifth positive coronavirus test was returned from the charter flights bringing players, coaches, officials and media to Melbourne for the season-opening tennis major. (Luis Ascui/AAP Image via AP)
By The Associated Press

With no way out, tennis players in lockdown are figuring out ways to keep themselves fit within the confines of their Melbourne hotel rooms as they prepare for the Australian Open.

Angelique Kerber, who won the Australian Open in 2016, spent her birthday in quarantine on Monday. At times in the past, she's spent the day playing or preparing for matches in the later stages of the tournament.

This year, with the season-opening Grand Slam event not starting until Feb. 8 because of travel restrictions related to the COVID-19 pandemic, she had to settle for a message posted on social media by Australian Open organizers to mark the occasion.

Kerber is among the 72 players doing hard quarantine for 14 days after a five positive coronavirus tests were returned from charter flights that brought almost 1,200 players, coaches, officials and media to Melbourne for what has previously been dubbed the Happy Slam.

That means those players won’t be allowed to leave their hotel rooms or practice for 14 days, creating a two-speed preparation period for the tournament. Others in less rigorous quarantine will be allowed to practice for five hours daily.

Those outdoor sessions started Monday in Melbourne. A smaller group of players who landed in the South Australia capital of Adelaide, including Serena Williams, Naomi Osaka, Novak Djokovic and Rafael Nadal, are also allowed outside to practice under bio-secure protocols.

Players such as Yulia Putintseva and Belinda Bencic initially complained in social media posts about being ill informed of the quarantine rules but have found ways to practice indoors by hitting balls against walls and windows and setting up other unique sessions.

Some players have expressed anger at being classified as close contacts merely for being on board charter flights with people who later tested positive. But local government, tennis and health authorities have said all players were warned of the risks well in advance.

“There’s been a bit of chatter from a number of players about the rules. Well, the rules apply to them as they apply to everybody else, and they were all briefed on that before they came and that was a condition on which they came,” Victoria state premier Daniel Andrews said Monday. “There’s no special treatment here ... because the virus doesn’t treat you specially, so neither do we.”

Responding to unconfirmed reports that Djokovic, an eight-time Australian Open champion, had proposed a list of ideas to change the quarantine conditions for players, Andrews said: “People are free to provide lists of demands, but the answer is no.”

Australia’s international borders are mostly closed, although there are exemptions in special circumstances. All arrivals must do mandatory quarantine. Each of Australia’s states and territories has its own border and travel restrictions, and those can change on very short notice.

Victoria state, which has Melbourne as its capital, accounted for 810 of Australia’s 909 deaths from COVID-19, most of those during a deadly second wave three months ago which resulted in curfews and lockdowns for the city.

So there's been some debate locally about whether it's right to stage a Grand Slam tournament bringing in people from parts of the world where the coronivirus is still taking a big toll.

With that in mind, Australian health and government officials aren