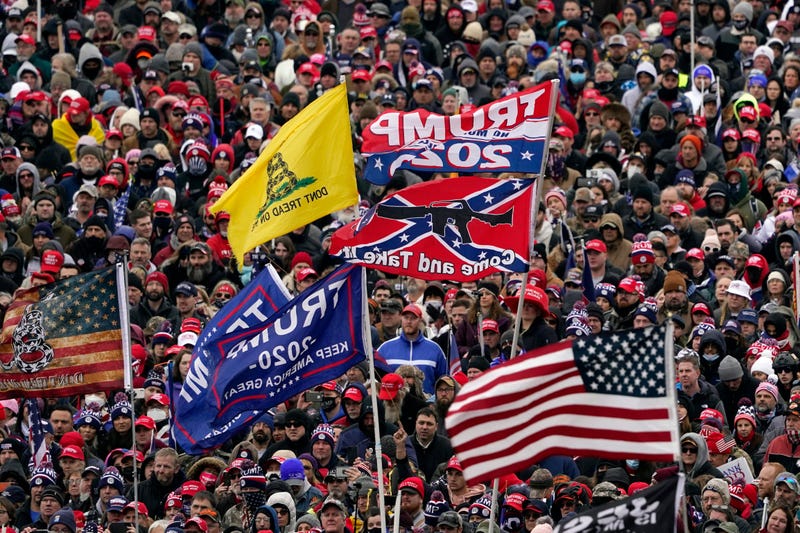 Photo credit FILE In this Wednesday, Jan. 6, 2021, file photo, supporters listen as President Donald Trump speaks as a Confederate-themed and other flags flutter in the wind during a rally in Washington. War-like imagery has begun to take hold in mainstream Republican political circles in the wake of the deadly attack on the U.S. Capitol, with some elected officials and party leaders rejecting calls to tone down their rhetoric contemplating a second civil war. (AP Photo/Evan Vucci, File)
By The Associated Press

BIRMINGHAM, Ala. (AP) — War-like imagery has begun spreading in Republican circles after the attack on the U.S. Capitol by a mob of President Donald Trump's supporters, with some elected officials and party leaders rejecting pleas to tone down rhetoric calling for a second civil war.

In northwestern Wisconsin, the chairman of the St. Croix County Republican Party was forced to resign Friday after refusing for a week after the siege to remove an online post urging followers to “prepare for war.” The incoming chairwoman of the Michigan GOP and her husband, a state lawmaker, have joined a conservative social media site created after the Capitol riot where the possibility of civil war is a topic.

Phil Reynolds, a member of the GOP central committee in California’s Santa Clara County, appeared to urge on insurrectionists on social media during the Jan. 6 attack, declaring on Facebook: “The war has begun. Citizens take arms! Drumroll please….. Civil War or No Civil War?”

The heightened rhetoric mimics language far-right extremists and white supremacists have used for years, and it follows a year of civil unrest over the killing of George Floyd, a Black man, by a white police officer and its links to systemic racism. Some leftists have used similar language, which Republicans have likened to advocating a new civil war.

The post-Floyd demonstrations prompted governments and corporations alike to reevaluate, leading to the removal of Confederate symbols across the South and the retirement of racially insensitive brands.

Then on Jan. 6, demonstrators stoked by Trump's false claims that he won the 2020 election brought symbols of the Old South to the siege of the Capitol, carrying Confederate flags inside and even erecting a wooden gallows with a noose outside the building.

Democrats say the uptick in war talk isn’t accidental. Rep. Maxine Waters, D-Calif., said Trump began putting his supporters in the frame of mind to make the opening charge years ago and is “capable of starting a civil war.”

“Since his first day in office, this president has spent four years abusing his power, lying, embracing authoritarianism (and) radicalizing his supporters against democracy,” she said in arguing for impeachment. “This corruption poisoned the minds of his supporters, inciting them to willingly join with white supremacists, neo-Nazis and paramilitary extremists in a siege of the United State Capitol building, the very seat of American democracy.”