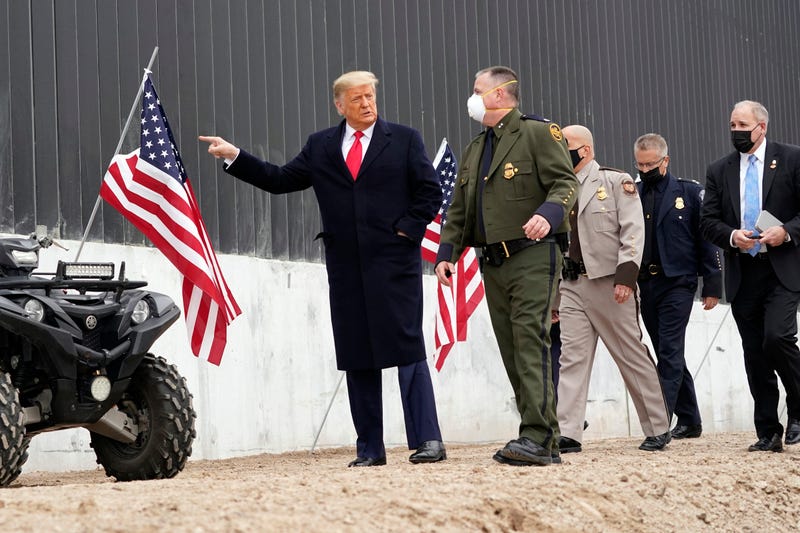 The Latest on the fallout from the attack of the U.S. Capitol by a mob of pro-Trump loyalists (all times local)

President Donald Trump says “be careful of what you wish for” as House lawmakers consider a resolution calling on Vice President Mike Pence to invoke the 25th Amendment to declare the president unable to serve.

Pence is not expected to take any such action, regardless of the vote.

Trump said Tuesday as he visited the southern border wall: “The 25th Amendment is of zero risk to me, but will come back to haunt Joe Biden and the Biden administration.” He added, “As the expression goes, be careful of what you wish for.”

After voting on the resolution, the House will proceed with legislation to impeach Trump. The president says the effort is causing “tremendous, anger and division and pain, far greater than most people will ever understand, which is very dangerous for the USA, especially at this very tender time.”

Trump has also addressed last week’s riot at the Capitol. He says, “We believe in the rule of law, not in violence or rioting.”

HERE’S WHAT YOU NEED TO KNOW ABOUT THE FALLOUT FROM THE RIOTING AT THE CAPITOL:

The U.S. House pressed swiftly forward Tuesday toward impeachment or other steps to forcibly remove President Donald Trump from office, even as Trump blamed Democratic foes and not himself for last week’s deadly attack on the Capitol.

— Trump takes no responsibility for riot as he heads to Texas

— Analysis: Trump abdicating in the job he fought to keep

— FBI warns of plans for nationwide armed protests next week

— EXPLAINER: Who’s been charged in the deadly Capitol siege?

HERE’S WHAT ELSE IS GOING ON:

President Donald Trump is at the U.S.-Mexico border in Texas trumpeting one of the pillars of his presidency: his campaign against illegal immigration and building a wall along the southern border.

It’s Trump’s first time appearing in public since a violent mob of his supporters sieged the nation’s Capitol last week in an effort to halt the peaceful transition of power.

Trump said Tuesday in Alamo that the wall has been crucial for securing the border.

He says he’s put an end to “immigration chaos,” despite the chaos his administration created with its child separation policy and attempted travel bans.

Before he spoke, Trump used a Sharpie to once again sign his autograph on a plaque on the wall.

Vice President Mike Pence has told governors on a call about the coronavirus that “our time” is coming to an end and a “new administration” is taking over.

Pence said Tuesday that the administration is in the middle of the transition and is working “diligently” with President-elect Joe Biden’s team. He thanked the governors for their leadership on the coronavirus and promised them a “seamless transition.”

He says the objective “is that there is no interruption in our continuous efforts to put the health of the American people first.”