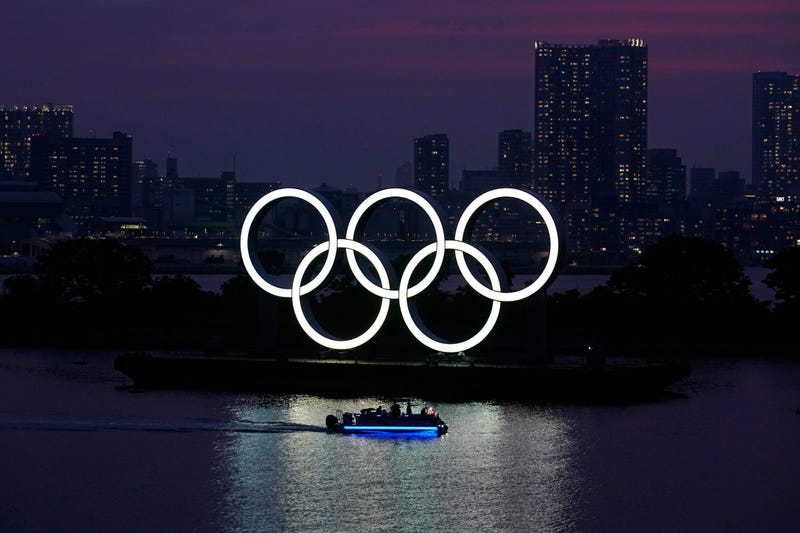 Photo credit FILE - In this June 3, 2020, photo, the Olympic rings float in the water at sunset in the Odaiba section in Tokyo. The year of the Tokyo 2020 Olympics has arrived. That would be 2021. Ever since the Olympics were postponed nine months ago, local organizers and the IOC have been biding their time. They’ve said we’ll have to wait until early in 2021 for details about how the Olympics can open on July 23 in the middle of a pandemic. (AP Photo/Eugene Hoshiko, File)
By The Associated Press

Ever since the Olympics were postponed nine months ago, local organizers and the IOC have been biding their time. They've said we'll have to wait until early in 2021 for details about how the Olympics can open on July 23 in the middle of a pandemic.

That time is here.

The International Olympic Committee and Tokyo organizers will have to start getting specific in the next few months. Though modest by global standards, the virus is surging in Japan with just over 3,000 deaths attributed to COVID-19.

The variant strain has been detected in the country, and reports say vaccines will not be widely available until March; not to mention the availability of the vaccine in the other 205 nations or territories expected to be represented in Tokyo.

The clock is ticking. The Japanese public appears more skeptical daily about the wisdom of holding the Olympics. In a telephone poll of 1,200 people this month, 63% said the Olympics should be postponed or canceled.

In an interview this month with CNN, Michael Phelps — the most decorated Olympian in history with 28 medals (23 gold) — said he was doubtful the Olympics should be held. The IOC has said they cannot be postponed again and will be canceled this time.

That would put the focus on Beijing's 2022 Winter Olympics and threats of a boycott tied to China's internment of at least 1 million Muslim Uighurs.

Q: Despite the uncertainties, what do we firmly know about staging the Tokyo Olympics?

A: Most of the solid information has to do with spending. Organizers say the delay will cost an added $2.8 billion, most of which will be covered by Japanese taxpayers. The official budget for the Olympics is now $15.4 billion, a 22% increase over the last budget. Government audits over the last several year suggest the real costs are at least $25 billion. Tokyo said the Olympics would cost about $7.5 billion when they were awarded in 2013.

Q: Will there be fans?

A: Yes, likely. But it's not clear if fans from abroad will be allowed. Japan has just closed its borders to almost all visitors because of rising cases and the discovery of the coronavirus variant. IOC President Thomas Bach has said he expects a “reasonable" number of fans to attend events. Fans or no fans, a main concern for the IOC is to get the events on television. Selling broadcast rights provides 73% of the IOC's income. Empty venues will not affect TV coverage. Most sports fans are accustomed to this by now.

But empty venues would cost local organizers ticket sales revenue worth about $800 million.

Q: IOC President Bach keeps talking about a “toolbox” to deal with the pandemic. What is this?

A: Bach is hedging his bets. He says the IOC and local organizers have many tools to combat the virus. They will not commit to any specific method until the course of the pandemic in clearer in the next few months. It is certain athletes will be told to come in late, leave as soon as they finish competing, and skip any tourism.

Q: Is there a deadline?

A: The Tokyo Olympics were postponed in late March. This seems like a reasonable date by which many firm decisions must be announced. The torch relay is to start in Japan on March 25, and it faces massive logistical questions just as the Olympics with 10,000 runners carrying the torch to every corner of the country. There was some brief speculation about dropping the relay, but that faded quickly with Toyota and Coca-Cola the major sponsors.

Q: Are the Olympic and Paralympic opening and closing ceremony going ahead?

A: Yes. The opening ceremony of the Olympics usually gets massive TV ratings and is a must-hold event. Organizers have assembled a new creative team and many themes from the old program had to be scrapped. Organizers say the ceremonies will be “simplified” in keeping with situation wrought by the pandemic. Curiously, even simplified ceremonies are adding costs. Organizers say an extra $35 million is needed for the new ceremonies. This goes on top of the $130 million already budgeted for ceremonies.

Q: What is the role of sponsors in these Olympics?

A: Dentsu Inc., the giant Japanese ad agency, has lined up a record 68 domestic sponsors for Tokyo. They had already chipped in an astounding $3.3 billion to the local operating budget. That is at least twice — maybe three times — as large as previous Olympics. Last week these companies, many beleaguered by the pandemic, still agreed to chip in at least $200 million more. This will cover a small portion of the cost of delay, which is $2.8 billion. Most costs must be covered by Japanese government entities. The IOC contributes $1.3 billion to fund the games. Everything else is on Japan.