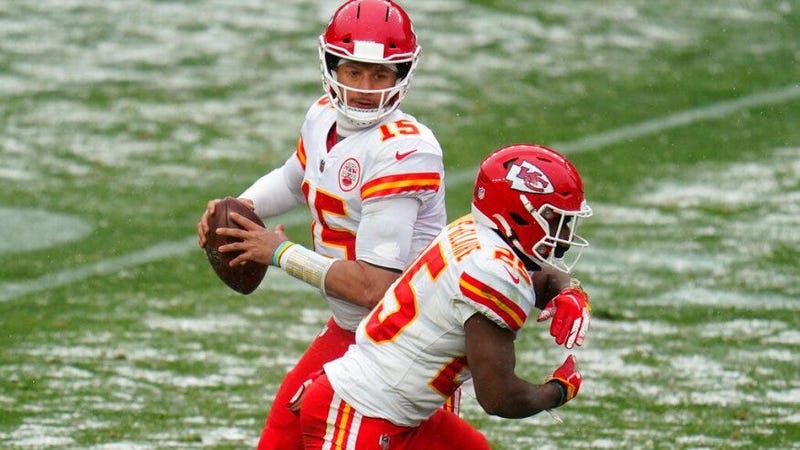 The Kansas City Chiefs didn’t need the usual heroics from Patrick Mahomes to rout the Denver Broncos 43-16 Sunday for their 10th straight win over their AFC West rivals.

The Chiefs (6-1) found other ways to dominate Denver (2-4) on a snowy afternoon that began with a temperature of 14 degrees at kickoff.

Kansas City took a 24-9 halftime lead even though Mahomes completed just one pass in the second quarter, a 5-yarder, and had just 99 yards through the air in the first half.

Mahomes finally extended his NFL-leading streak to 17 consecutive games with a touchdown throw when he hit Tyreek Hill from 10 yards with 11 minutes remaining in the fourth quarter.

That made it 37-9 and compelled Broncos pass rusher Bradley Chubb to blow up at his teammates on the sideline.

Mahomes’ TD throw to Hill followed the Chiefs’ fourth takeaway, an interception by Tyrann Mathieu when rookie KJ Hamler let Drew Lock’s pass bounce off him and right into the arms of the Chiefs star cornerback.

Mahomes finished a methodical 15 of 23 for 200 yards and a touchdown with no interceptions and four sacks.

A week after the Chiefs ran more times than they threw it for the first time in Andy Reid’s eight seasons in Kansas City, it was K.C.’s ground game, special teams and defense that did the damage in Denver in the NFL’s first snow game of 2020.

In the first half, the Chiefs scored touchdowns on Byron Pringle’s 102-yard kickoff return and Daniel Sorensen’s 50-yard interception return to go with Clyde Edwards-Helaire’s 11-yard run in which he broke five tackles.

Edwards-Hilaire carved his way through a wall of Denver defenders to open the scoring on a snowy, freezing afternoon.

Running up the middle, the rookie plowed through linebacker Alexander Johnson and defensive backs Kareem Jackson, Bryce Callahan, Justin Simmons and Michael Ojemudia like a bowling ball knocking down pins.

Sorensen jumped the route and picked off Lock’s throw to tight end Noah Fant at midfield and trotted into the end zone for a 17-6 lead.

This game marked the first time running backs Melvin Gordon and Phillip Lindsay were both healthy since the opener, but Lindsay went out with a concussion just before halftime after gaining 79 yards on nine carries. He didn’t return.

Gordon, who missed last week’s win at New England with strep throat a few days after his arrest for driving under the influence, turned the ball over on a failed flea flicker on Denver’s first drive of the second half.

Gordon, who also lost a fumble in the first half, overthrew Lock on his toss-back and Frank Clark recovered for Kansas City. That takeaway led to a field goal and a 27-9 lead.

Gordon’s short TD run in the closing minutes made it 37-16.

Le’Veon Bell ran six times for 39 yards in his Chiefs debut, and Edwards-Helaire had 46 yards on eight carries.

Broncos: Lindsay (concussion) didn’t return after halftime. Lock landed awkwardly when he slid after a scramble in the second half, but took off the brace on his left leg and missed just one play.