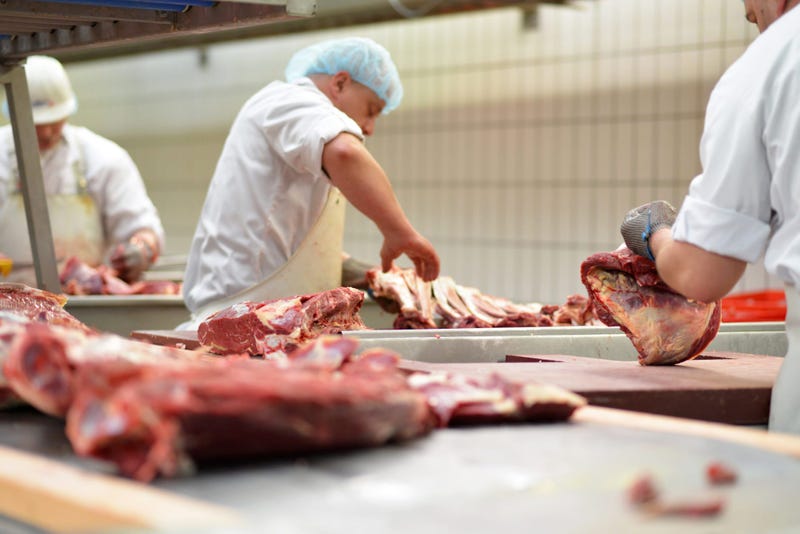 The comments — including a Wisconsin Supreme Court justice’s remark that an outbreak didn’t seem to have come from “regular folks” — outraged workers and advocates who slammed them as elitist and critical of immigrants, who make up a big share of America’s meatpacking workforce.

And the remarks stood in contrast to public U.S. outpourings of gratitude for other essential workers like police officers, health care professionals and grocery store workers.

In Ford County in Western Kansas, health officials have said the outbreak is largely tied to a “high concentration of cases” at meat-packing plants there, local news station KMBC reported.

South Dakota Gov. Kristi Noem, a Republican, generated ire last month when discussing the closure of a Smithfield pork plant in Sioux Falls that infected 1,000 employees and people who came in contact with the workers, saying “99% of what’s going on today wasn’t happening inside the facility.”

The spread of the virus happened “more at home, where these employees were going home and spreading some of the virus because a lot of these folks who work at this plant live in the community, the same building, sometimes in the same apartment,” she said on Fox News.

Noem’s comments created a foundation for blaming virus outbreaks on the meatpackers’ home lives instead of conditions at plants, where employees often worked shoulder to shoulder with little to no protective gear as U.S. virus cases surged, said Taneeza Islam, who runs the refugee and immigrant support group South Dakota Voices for Peace.

“Well, we see people concentrated together,” Ricketts said. “And that’s certainly true with our food processors where you have people together. But it can also be true in households if you have multiple generations of people living together, or a lot of people living in a household.”

U.S. Health and Human Services Secretary Alex Azar cited crowded meatpacking worker living conditions in a call last week with members of Congress, according to a story first reported by Politico. Agency spokesman Michael Caputo on Thursday defended Azar’s remarks as “nothing more than a statement of the obvious.”

Achut Deng, a Sudanese refugee who works at the Sioux Falls plant, said after Noem’s remarks that the comments offended her, calling them “ridiculous.”

Many of Smithfield’s Sioux Falls employees live in well-maintained apartment complexes near the plant, some in multi-generational homes so older family members can be cared for. Others have single-family units and Deng, who was infected and recovered, believes she caught the virus at the plant because she lives only with her three children who have been out of school.

In Wisconsin, Supreme Court Chief Justice Patience Roggensack appeared to downplay the impact of an outbreak at the JBS Packerland beef plant in Green Bay while hearing arguments on a lawsuit seeking to strike down the state’s stay-at-home order. Coronavirus cases in Brown County, where Green Bay lies, jumped from 60 to about 800 in two weeks, a state government lawyer told justices this week.

“These were due to the meatpacking, though,” responded Roggensack, part of the court’s conservative majority. “That’s where Brown County got the flare. It wasn’t just the regular folks in Brown County.”

“It shows she considers their lives less worthy,” Ortiz said. “It’s an abhorrent comment, especially at this moment.”

Many U.S. meat plant workers are Latino but in recent years, particularly in the upper Midwest, African immigrants have taken meatpacking jobs. About 40 languages are spoken by workers at the Sioux Falls plant, the Centers for Disease Control has said.

Ortiz said many Latino and immigrant families with workers in the sector “are very family-oriented” and that could contribute to the virus’ spread. But she insisted that the greater threats are workplace conditions and policies she claimed encourage workers to come in sick and do not provide enough worker virus testing.

In South Dakota, Noem said she made her meatpacking company worker living condition comments after the Sioux Falls plant closed and public health officials’ focus shifted to stopping the outbreak where the workers lived.

She agreed to speak personally with some meatpacking workers after advocacy groups made the demand. Those calls, organized through Smithfield, were scheduled for Thursday night and Friday.

In Nebraska, meatpacking worker advocates disputed Ricketts’ suggestion that an outbreak could have happened because of crowded worker households at the Tyson Foods beef plant in Dakota City, where hundreds were infected.

“The governor’s statement that this is a community issue is completely untrue,” said Rose Godinez, legal counsel for the American Civil Liberties Union of Nebraska, and the daughter of retired meatpacking workers.

She said plant workers told her that most employees who tested positive own or rent their homes and in general do not live in crowded, small dwellings.

Godinez said Ricketts’ comments appeared aimed at “trying to deflect some of the companies’ failures.”

“If these workers are deemed to be critical infrastructure workers, deemed to be essential workers, they deserve the utmost respect, the highest level of protection,” she said.