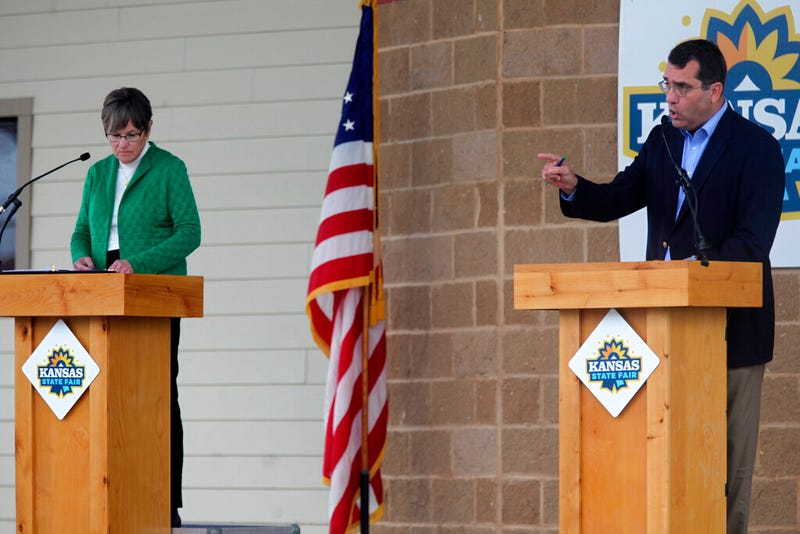 Kansas' democrat governor launched a new television ad on Wednesday in which she says men don't belong in women's sports. It's a move seeking to blunt Republican attacks on her for vetoing two proposals to ban transgender athletes from girls' and women's school and college sports.

Gov. Laura Kelly doesn't go into details on her position in the 30-second ad, which is her first to address what Republicans see as a key education issue that hurts Kelly during a close reelection race. Her campaign later said Kelly believes decisions about transgender athletes should be made by schools, doctors, families and local officials and that the two bills she vetoed would have “created unnecessary new government mandates.”

But Democrats said the party’s voters would understand the ad as saying that the issue doesn’t involve men playing women’s sports because trans women are women.

“Men aren’t playing girls’ sports. This is the scare-tactic framing of the far right,” said Tom Witt, executive director of Equality Kansas, the state’s leading LGBT-rights group. “What we’re talking about in this situation is schoolkids in competitive games with their peers at school, and our position is, trans girls are girls; trans boys are boys.”

In the ad, Kelly looks into the camera and says: “Of course men should not play girls' sports. OK, we all agree there,” before criticizing Schmidt on school funding issues.

Her campaign launched the ad after a Republican Governors Association ad featured a collegiate swimmer criticizing Kelly. That followed four other ads in which the RGA raised the issue, and Schmidt says in his most recent television spot that Kelly is aligned with groups pushing “the transgender agenda.”

The swimmer featured in the last RGA ad, University of Kentucky graduate Riley Gaines, said in a phone interview that she was surprised by Kelly's ad because, “It's not aligning with anything she's said thus far.”

Tim Shallenburger, a former state treasurer and Kansas Republican Party chair, said Kelly had to deal with the issue because it's important to many voters. He called Kelly's latest ad “pretty sly,” adding that she's “trying to catch Republicans.”

Joan Wagnon, a former Topeka mayor and Kansas Democratic Party chair, questioned whether Schmidt's stance will play well with moderate Republicans. But Wagnon also said that, had she been the candidate, she's not sure she would have made the ad.

"If you get sucked into those kind of tit-for-tat responses, it clouds your message,” she said.

Kelly is the only Democrat governor running for reelection this year, in a state that former President Donald Trump carried in 2020. That makes her a big target for the national GOP. But Democrats were buoyed in August, when Kansas voters decisively rejected a proposed amendment to the state constitution that would have allowed the Republican-controlled state Legislature to greatly restrict or ban abortion. Kelly opposed the measure, while Schmidt backed it.

However, Republicans see an opportunity to tap into suburban parents' frustrations with coronavirus-related school restrictions and what's taught about racism, gender and sexuality. They were encouraged by Republican Glenn Youngkin's victory in the 2021 governor’s race in normally blue Virginia after making parents' rights in education a key issue.

Youngkin and Schmidt were set to campaign together Thursday in the Kansas City area, after a Sunday rally with Florida Gov. Ron DeSantis, a Republican who has pushed conservative education initiatives.

State Sen. Renee Erickson, a Wichita Republican and the leading sponsor of the two measures, said of Kelly: “She’s having to pivot and backtrack on her two vetoes, and I don’t think Kansans are going to buy it, quite frankly.”

Including Florida and Texas, 18 GOP-led states have laws banning transgender athletes from participating in youth sports, according to the Movement Advancement Project, a Colorado think tank promoting LGBT rights. In the Kelly campaign's statement Wednesday, spokesperson Lauren Fitzgerald noted that Republican governors in Indiana and Utah have vetoed such measures, although those vetoes were overridden by GOP-controlled Legislatures.

Critics say such bans are discriminatory, and that merely discussing them leads to bullying.

Kelly's veto messages for bills in 2021 and 2022 also said they would hurt the state's business climate. In her second message, she added that such proposals did not come from athletes or schools but from “politicians trying to score political points.”