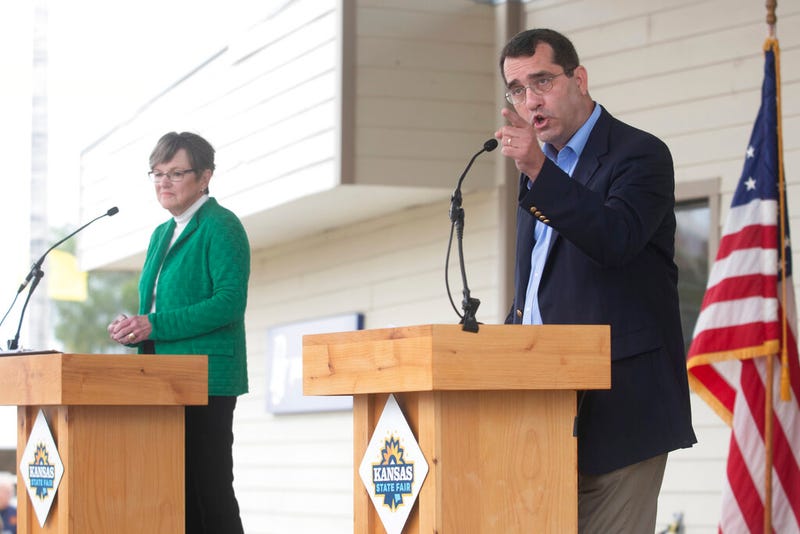 Governors races often are overshadowed by the fight for control of Congress during midterm elections. But this fall, which candidate wins a state’s top executive post could be pivotal for the nation’s political future.

With abortion rights, immigration policies and democracy itself in the balance, both parties are entering the final weeks before the Nov. 8 election prepared to spend unprecedented amounts of money to win seats for governor. Those elected will be in power for the 2024 election, when they could influence voting laws as well as certification of the outcome. And their powers over abortion rights increased greatly when the U.S. Supreme Court in June left the question to states to decide.

For Democrats, Cooper said, governors "are often the last line of defense" on issues that have been turned over to states, including gun laws and voting rights in addition to abortion. That's been especially true in places with Democrat governors and Republican-controlled legislatures, such as Wisconsin and Kansas — states both parties have made top targets for victory in November. Democrats are leading Republican candidates in two important battleground states with GOP-led statehouses, Michigan and Pennsylvania.

Kansas Gov. Laura Kelly is the only Democrat governor running for reelection in a state carried by former President Donald Trump in 2020. The former legislator won the office in 2018 against a fiery conservative after running as a moderate who promoted bipartisanship.

She now faces three-term state Attorney General Derek Schmidt, who has repeatedly tried to tie her to President Joe Biden and criticized her as too liberal for the red state. Schmidt's campaign has been hurt, however, by a third-party bid from a conservative state lawmaker.

During a debate at the Kansas State Fair this month, Schmidt portrayed Kelly's position on abortion as too extreme, telling a crowd she supports abortion without restrictions.

Kansas has been the unlikely site of Democrat hopes in regard to abortion rights. In August, Kansas voters overwhelmingly defeated a proposed amendment to the state constitution that would have allowed the GOP-controlled Legislature to greatly restrict or ban abortion. Kelly opposed the measure, though she has tried to focus her campaign elsewhere.

Schmidt said he respects the outcome of the vote but that the abortion debate isn't over.

“What was not on the ballot was Governor Kelly’s position,” he said.

Throughout nearly two decades in elective politics, Kelly has opposed nearly every restriction on abortion now in Kansas law. But asked about Schmidt’s characterization of her position on abortion, she said, “You know, I have never said that.”

Kelly hasn't emphasized abortion as an issue, though many Democrats think it would help her. Instead, she has been touting the state’s fiscal strength and her work to lure businesses and jobs.

“Maybe I'm not flashy, but I'm effective,” she said at the end of the state fair debate.

In Wisconsin, Democrat Gov. Tony Evers warns voters that democracy is on the ballot this fall and notes he has vetoed more bills than any governor in modern state history, including measures Republicans pushed to change how elections are conducted.

Evers faces businessman Tim Michels, who was endorsed by Trump. Michels has claimed the 2020 presidential election was rigged — a lie Trump has pushed in an effort to overturn his loss to Biden — and supports changes to voting and election laws in the state, a perennial presidential battleground.

Michels is among several Trump-backed nominees who emerged from sometimes brutal GOP primaries. In some cases, more moderate or establishment Republicans warned that the far-right pick endorsed by Trump would struggle to win in a general election.

“We’re a divided nation right now, and it is very tribal. And much of that crept into this cycle,” said Ducey, who is term-limited.

Ducey and Trump have feuded over the governor's refusal to cede to Trump’s wishes and overturn the 2020 election results in his state. Lake has said she would not have certified Biden’s victory, even though it has been affirmed by multiple reviews.

Cooper said the DGA will be “leaning in hard” in Arizona as well as in a tight contest in Georgia, where GOP Gov. Brian Kemp is facing Democrat Stacey Abrams, a former state legislative leader who lost a close 2018 race to him. In the primary, Kemp easily defeated former Sen. David Perdue, who was endorsed by Trump.

Both the Democrat and Republican governors associations entered 2022 having raised record amounts of money — over $70 million each — in what they say is a sign that voters are increasingly focused on state races. Cooper attributed some of the increased interest to Trump’s efforts to overturn the 2020 election results.

The RGA is bullish about defending Republican governorships in Arizona and Georgia, and is heavily focused on picking up a handful of blue states in the West, including Oregon and New Mexico.

At the top of the list is Nevada, where Clark County Sheriff Joe Lombardo is among Republicans' most prized recruits this election cycle and is challenging Gov. Steve Sisolak.

In Oregon, GOP hopes rest on an independent candidate siphoning enough support from the Democrat and allowing the Republican to pull out a victory.

Democrats, meanwhile, are confident they will take back governorships in Massachusetts and Maryland, two blue states currently led by moderate Republicans, after far-right Republicans won their party’s nominations.

Pennsylvania, a top presidential battleground, is another state where the GOP nominee could hurt Republicans' chances in November. GOP voters chose Doug Mastriano from a crowded field, picking a Trump-backed candidate who opposes abortion rights without exceptions, spread conspiracy theories about the 2020 election and organized bus trips to the U.S. Capitol on Jan. 6, the day of the violent insurrection. He faces Democratic Attorney General Josh Shapiro.

Asked about the race during the discussion at Georgetown, Ducey was blunt.

In Michigan, a swing state where Trump and his allies also tried unsuccessfully to overturn his 2020 loss, Trump-backed nominee Tudor Dixon won a chaotic GOP primary. Democrats have repeatedly criticized Dixon for her stance against abortion, including in cases of rape or incest. A measure to enshrine abortion rights in the state constitution also will be on the November ballot, and Democrats are hoping it will help their candidates.

First-term Democrat Gov. Gretchen Whitmer has millions more in her campaign fund than Dixon, but said after an appearance at the Detroit Auto Show that she was taking nothing for granted.

“This is Michigan, and it’s always tight in Michigan,” she said.