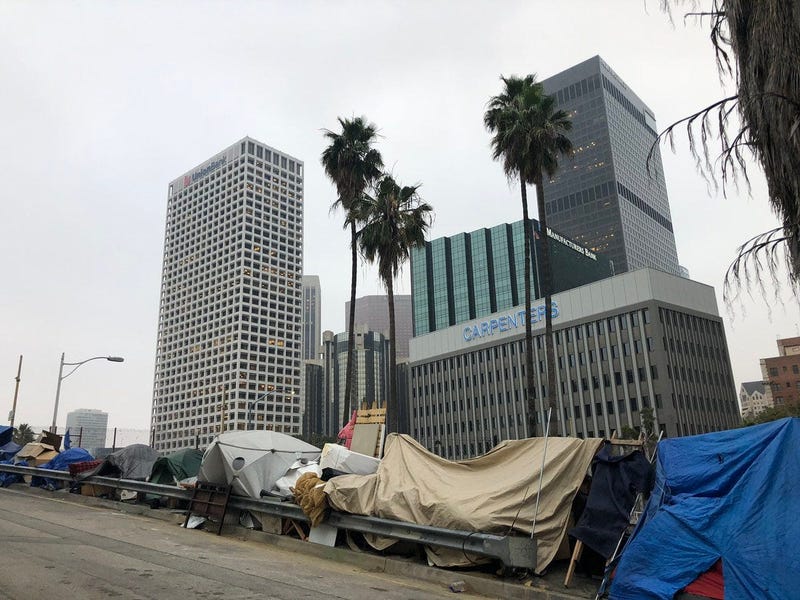 LOS ANGELES (CNS) - The ability of Southland governments to enact and enforce restrictions on homeless people sleeping on sidewalks or in other public areas was left in doubt today when the U.S. Supreme Court let stand a lower court ruling barring such regulations unless adequate shelter space is available.

The city and county of Los Angeles, along with a host of other government agencies, had filed court papers in support of an appeal of the ruling in the case known as Martin v. City of Boise. The ruling by the 9th U.S. Circuit Court of Appeals essentially bars cities and counties from citing people for sleeping on sidewalks unless there is enough alternative shelter space available for the homeless.

The U.S. Supreme Court, however, declined to hear the case, meaning the 9th Circuit ruling will stand.

"With unprecedented numbers of people falling into homelessness nationwide, we are experiencing an urgent humanitarian crisis," Los Angeles County Supervisor Mark Ridley-Thomas said. "More than 1,000 individuals will die on Los Angeles County streets this year. Supporting the city of Boise's position to appeal to the Supreme Court was never an attempt to criminalize the homeless. Rather, it was a pursuit of a legal framework that is clear, in comparison to a status quo that is ambiguous and confusing."

Ridley-Thomas said the ruling only hampers the county's ability to help people living on the streets, and the decision will continue to create unsafe and unhealthy conditions.

On the other side, homeless advocacy organizations celebrated the Supreme Court's decision not to hear the case as a victory for people who have had negative experiences with homeless service officials and the police.

"We're glad that the fate of our neighbors doesn't rest with a very conservative Supreme Court," the Los Angeles-based homeless advocacy organization KTown for All stated on Twitter. "This news is a serious relief to a number of homeless residents, service providers and advocates."

In October, Los Angeles City Attorney Mike Feuer filed court papers in support of the city of Boise's appeal of the case to the Supreme Court.

"The city agrees with a central tenet of Boise, that no individual should be susceptible to punishment for sleeping on the sidewalk at night, if no alternative shelter is available," Feuer said. "But (the case decision's) rationale sweeps too broadly, and the opinion is internally inconsistent and unclear. By raising more issues than it resolves, the decision leaves jurisdictions like Los Angeles without the certainty necessary to balance intensely competing interests without risking costly and time-consuming litigation."

One of the city's largest areas of concern regarding homeless people camping in public areas is in the Sepulveda Basin. An Oct. 24 fire in the area burned about 60 acres, and another burned 10 acres in July, when propane tanks located at homeless encampments in the area added to the danger for fire crews working to douse the flames.

The city has conducted cleanups and implemented restrictions on homeless people's ability to camp in the overnight, including adopting a law that prohibits entrance to certain fire zones on high-risk days.

But the Supreme Court's decision takes away the government's ability to remove the homeless permanently unless they have housing or a shelter for them.

A proposal brought to the Los Angeles City Council in September that would have restricted locations where homeless people can sleep went nowhere. It would have set enforcement regulations on homeless people who block sidewalks and emergency entrances and would have kept them at least 500 feet from schools and other sensitive areas.

It would have also set enforcement provisions for people who "harass or threaten" pedestrians, although some council members suggested the language of the law was broad enough that it would give law enforcement leniency in how it issues citations or makes arrests.

The council took no formal action on the proposal, although members said the measure had at least prompted a needed discussion. The proposal could be heard again by the council's Homelessness and Poverty Committee.

The city has had a law regulating sleeping on streets and sidewalks since 1968, but much of it was invalidated by the Martin v. Boise case.