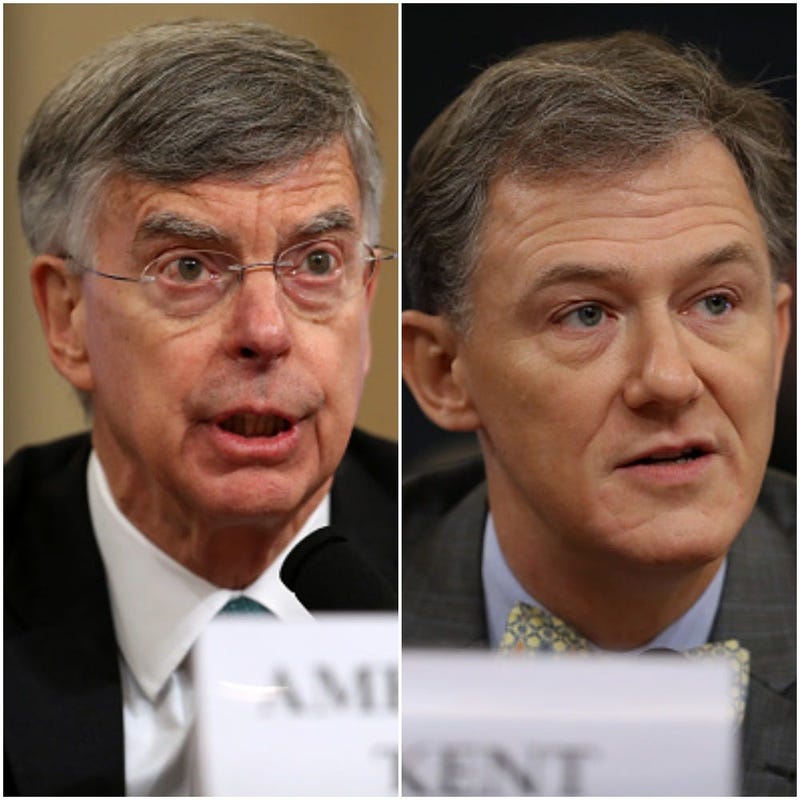 The inquiry will include three total public hearings from three State Department officials.

Republicans remained poised to defend the president amid this probe from the House Democrats, saying there weren't first-hand accounts of anything related to Trump and Ukraine nor did they speak directly to the president himself.

Taylor, who was second to testify, told House Intelligence Committee Chairman Adam Schiff that during a lunch with  Gordon Sondland, the U.S. ambassador to the European Union, his staff members overheard a conversation between Trump and another Sondland by phone, saying it sounded like the president cared more about the investigation into Joe Biden than Ukraine.

Schiff is leading the impeachment investigation and opened with statements about whether Trump used the highest office in the land for personal gain when it came to dealings with Ukraine. He said the answer "..to these questions would not only affect the future of this presidency but also the future of the presidency itself.."

Schiff also stressed he would protect the identity of the whistle blower.

Kent was first to testify Wednesday, detailing the ouster of ambassador Marie Yovanovitch and interactions with Trump's lawyer Rudy Giuliani.

Meanwhile, Trump released a video Wednesday morning telling the public what the public hearings meant and how they were the "single greatest scam in the history of American politics."

"They're trying to stop me, because I'm fighting for you. And I'll never let that happen." — President @realDonaldTrump pic.twitter.com/ch0N1SWShe

On Friday, the committee will hear from Marie Yovanovitch, a former ambassador to Ukraine.

The hearing comes after House Speaker Nancy Pelosi launched the official and formal impeachment inquiry against President Trump -- a probe to find out whether the president abused his presidential powers. In an Associated Press story, she said such actions would mark a "betrayal of his oath of office" and declared: "No one is above the law."All three of the officials have already testified behind closed doors, according to an Associated Press story. "The Constitution doesn't require a vote to begin impeachment."

Meanwhile, Trump has called the probe "illegitimate," a "witch hunt" and called his phone call with the Ukranian president "perfect."

In September, he released the transcript of the July phone call, which was the second phone call between the two leaders. This week, he tweeted he would release a transcript of his first call with Ukrainian President Volodymyr Zelensky.

I will be releasing the transcript of the first, and therefore more important, phone call with the Ukrainian President before week’s end!

In order to continue being the most Transparent President in history, I will be releasing sometime this week the Transcript of the first, and therefore most important, phone call I had with the President of Ukraine. I am sure you will find it tantalizing!