A teenager in Los Angeles was forced to become the head of his household after his parents got sick with COVID-19. Despite the challenges, the high school football player continued his studies and graduated with high marks, and he's our KNX Helpful Honda Hero of the Week!

It’s been an emotional year for Josh Morales. As a high school senior, it was a little tough to adjust to online learning during the pandemic. Graduation was on the horizon, but nothing was normal. At times, things were a little sad.

"Missing out on a lot of the 'senior things', that were supposed to [happen] but couldn't, due to COVID," explains the 18 year-old, "and not seeing my friends every day." 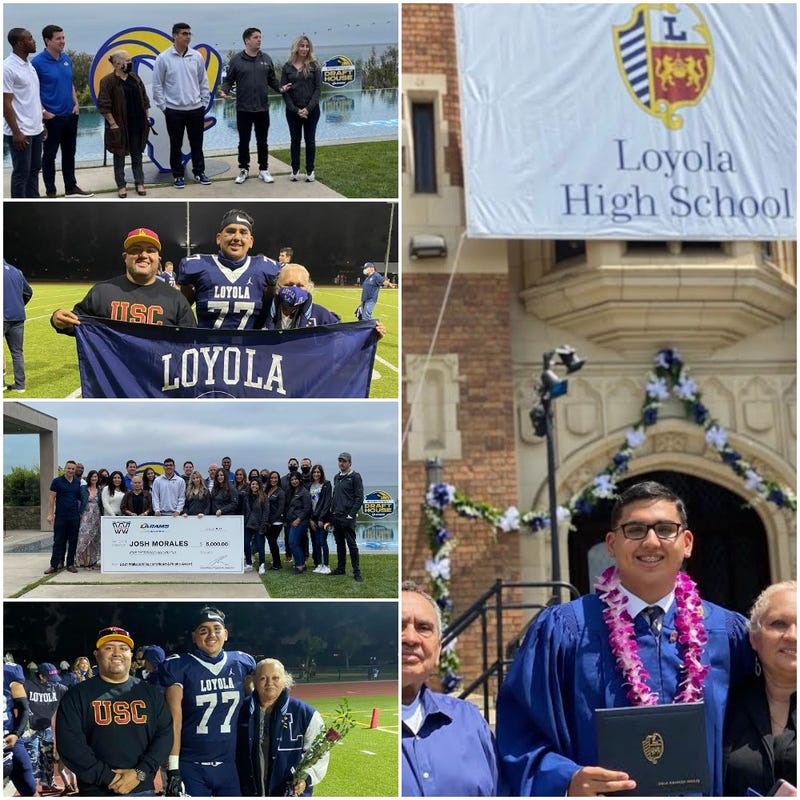 As a member of the high school football team, his season was also uncertain. And then, just weeks before Christmas, COVID-19 hit his family.

"We had to put my dad in the hospital for 38 days, and my mother was close to being hospitalized, as well," says Josh. "But, thankfully, her breathing was stabilized. I did the best I could to help them get better. Giving them food, medicine, doing all of the chores around the house."

Josh was also infected with COVID-19. Under quarantine, everything became his responsibility. But, Josh pulled everyone through. And, he kept his grades up, as well!

His resilience and courage caught the eye of The Wallace Firm and the NFL's Los Angeles Rams. Together, the two groups honored Josh with the first-ever “Heart & Hustle Award.”

"Josh's story resonated with everyone at the law firm, as well as with the Rams organization, " says The Wallace Firm CEO, Brad Wallace. "He personifies the heart and hustle that we wanted to award with this recognition."

Brad says Josh was an obvious selection, after battling through a lot of adversity. "His poise, his maturity, his family-first mindset, his perseverance, his courage. Being such a young guy, having to shoulder that burden." With the award, The Wallace Firm and the LA Rams also gifted a $5,000 scholarship to Josh.

The teenager is now headed to USC in the fall. He's hoping to become the first member of his family with a four-year degree. Josh says the team around him helped through the toughest days. "My coaches and teammates gave me a lot of support, and my closest friends and my girlfriend, as well. So, I didn't feel alone, thankfully, because I had a lot of good people around me."

Loyola High School graduate Josh Morales of Los Angeles, is our KNX Hero of the Week!

KNX Heroes is brought to you by California Resources Corporation, saluting our military veterans, and all of our heroes! Go to https://crc.com/ for more information.

Find out what your Helpful SoCal Honda Dealers are up to, by heading to their Facebook page at https://www.facebook.com/SoCalHondaDealers/

Nominate an upcoming KNX Hero of the Week, at https://www.audacy.com/knxnews/nominate

Get more information about the “2021 Heart and Hustle Award” at https://wallacewins.com/