RIVERSIDE, Calif. (KNX) — A salon thief who made off with $8,000 has been dubbed the “Snake Burglar” for the odd way he slithered through the salon to avoid detection.

“Literally slithering like a snake throughout the shop,” Riverside Police Officer Javier Cabrera told KNX . “Ultimately he took products and actually got into a safe and was able to take $8,000 [in cash and products].”

Police said the thief broke into the salon around 5:30 a.m. in the 10200 block of Indiana Avenue through a rooftop fire escape. And an hour after he made off with the goods — he attempted another theft at a nearby veterinary clinic.

“He actually kicked out a window pane to the front of the business and actually, same thing...slithered his way through the businesses and about 10 minutes into committing his crime he actually triggered the motion sensors,” Cabrera said.

At the vet clinic, he wasn’t able to grab any goods, but Cabrera said cameras caught him getting away on a skateboard.

Turns out, the odd behavior isn’t new to the area. Other businesses on Indiana and Tyler Avenues have been targeted recently and their cameras are all catching the same slithering motions.

Whether it’s the same person or not, Cabrera said there’s a method to the madness.

“He’s avoiding the motion detectors from the alarm,” Cabrera said, explaining that many surveillance systems offer a motion sensor feature.

“To trigger that motion sensor you have to be at a certain height...in this case he looks like he’s crawling through the ground to avoid detection from the sensor so that way the alarm company won't get a notification.”

So far, there is no concrete description of the suspect. Cabrera said detectives are assigned and will work to enhance the video to get solid still and share them with the public in hopes of identifying the thief. 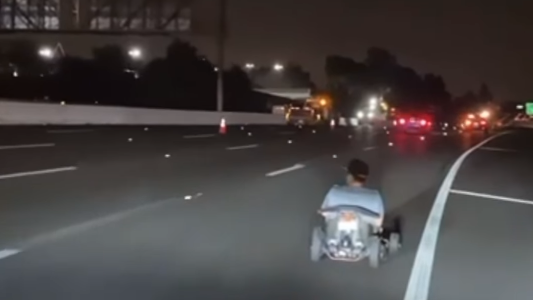 Go-kart driver on L.A. freeway pulled over by CHP