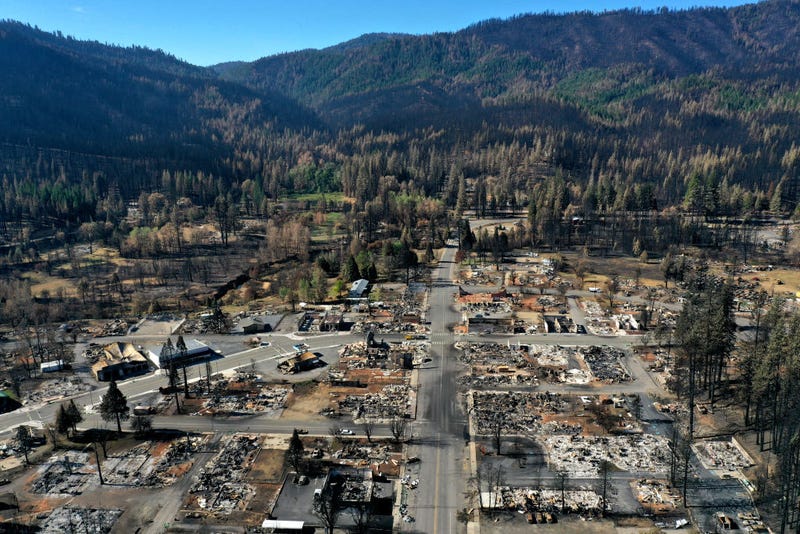 In an aerial view, the remains of homes and businesses that were destroyed by the Dixie Fire are visible on Sept. 24, 2021 in Greenville, California. The Dixie Fire has burned nearly 1 million acres in five Northern California counties over a two-month period. The destructive fire is the second-largest fire in state history and has destroyed hundreds of structures. It is currently 94 percent contained. Photo credit Justin Sullivan/Getty Images
By Marie Estrada, KNX 1070 Newsradio

Lawmakers in Sacramento passed the moratorium after wildfires ripped through the state in 2017 and 2018, with the hope that owners would put in the work to make properties more fire resistant and avoid having their policies canceled.

In all, 18 percent of the state’s households could lose protection, according to Bloomberg. The news site reports that the dropped households would be the largest single group to lose coverage since the moratorium law took effect three years ago.

David Russell, a professor of insurance and finance at CSU Northridge, said the increased rates will affect more than just those in the fire-ravaged areas.

“We’ll all see rate increases, even for people who don’t have claims...and that’s always a difficult pill to swallow,” Russell told KNX. He added that some may see their long-time policies canceled altogether.

New fire disasters in the same areas could be the only hope for homeowners, according to Bloomberg, as year-long grace periods begin after new disasters.

The consumer protection law requires a mandatory one-year moratorium “on insurance companies canceling or non-renewing residential insurance policies in certain areas within or adjacent to a fire perimeter after a declared state of emergency is issued by the governor.”

If a fire on the list affected someone’s address, their insurance company is not able to cancel insurance or issue a non-renewal notice, according to the state website.

The California Fair Plan is another option for high-risk properties when traditional insurance companies refuse to cover properties. To learn more, click here.